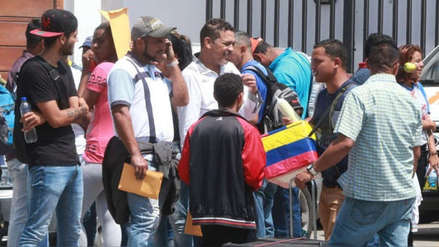 The Peruvian government decided to shorten the terms for the Venezuelan citizens to submit the request for Temporary residence permit (PTP) . According to the Supreme Decree No. 007-2018-IN published in the Official Gazette El Peruano only Venezuelans arriving in Peru may process this permit until 31 October 2018.

The decree correcting the final date of 31 December, laid down in a previous line, specifies that will be the deadline for submitting the request for the PTP 31 December 2018 and no longer at 30 June of 2019.

The above-mentioned regulation signed by the President of the Republic, Martín Vizcarra Cornejo ; and the Minister of Home Affairs, Mauro Medina, states that to request the PTP, the person with Venezuelan nationality must register a regular income for Peruvian territory.

The change is sensible

In statements to the agency Andina, the internationalist Andres Gomez de La Torre said that the changes made by the government are reasonable and do not affect the solidarity of the Peruvian stands with the Venezuelan migrants .

"We had been excessively concessional regarding the deadlines to take advantage of this advantage." According to the standard approved by the previous president, the PTP was an invitation for thousands of Venezuelans to Peru for everyone who entered the country until 31 December 2018 to come, "he said.

Gómez de La Torre said that the government's decision will encourage the [19449005] Venezuelans to regularize their immigration status in the country, to avoid informality, labor exploitation and other illegal activities. The internationalist said that this decision must be respected and understood by the Venezuelans themselves; because it does not undermine the humanitarian vision of the government at all.

What is the PPT?

The temporary residence permit is a document issued by the national leadership of Migrations that allows the Venezuelan citizen to work and to access basic health and education services.

The applicant must be in the country in the irregular migration situation as a result of the expiration of his permit for permanence or stay; or that, while in a normal migratory situation, opts for the above permit. They may not have police, criminal and / or judicial archives at national and international level.

If the PTP application does not take place, the Venezuelan person who is in an irregular migration situation must leave the country after the expiry of his tourist status.