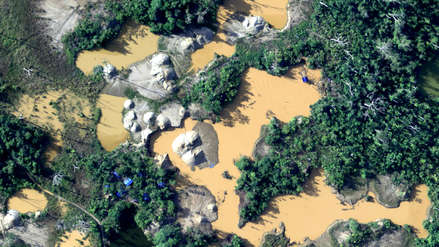 The impact of illegal mining on Mother of God It could be captured in a surveillance operation of the Peru Air Force, which took place on the first days of August, to show the extent of the effects of these illegal activities on the forests of the jungle.

The more than 20,000 aerial photographs will enable the authorities to reduce the levels of degradation environment and biodiversity. In addition to the establishment of the vulnerable areas natural disasters, to take more effective protective measures.

Through a statement, the Department of Defense reported that the operations were carried out in the airspace of the provinces of Tambopata and Manu using a C-26B plane. They used drones and cameras with video recordings in high resolution.

The C-26B plane managed to record 134 linear kilometers of image with its camera, covering a total area of ​​26,200 hectares; and obtained about 30 hours of video, with an area of ​​161,000 hectares. the drones They obtained almost 800 aerial photographs and three hours of video.

The series of images was later edited in the National Amazonic Surveillance Center (CEVAN), at the FAP facilities, resulting in an important visual material that provides a better appreciation of the unauthorized activities and the location points.

The operation also included the participation of various specialized private entities, such as Harvard University, APD Peru, SAR Peru Amazon, among others. All called by the Air Force of Peru.

The photo and video report will be delivered to the Public Prosecution Service, the Ministry of Culture, the Regional Government of Madre de Dios and the Harbor Master's Office of the Navy; also for civilian institutions connected with the conservation and protection of the environment and biodiversity in Madre de Dios, such as the Association for the Conservation of the Amazon Basin (ACCA) and the Federation of natures of Madre de Dios (FENAMAD) .