In an emergency they declare the Executive Board of the PJ 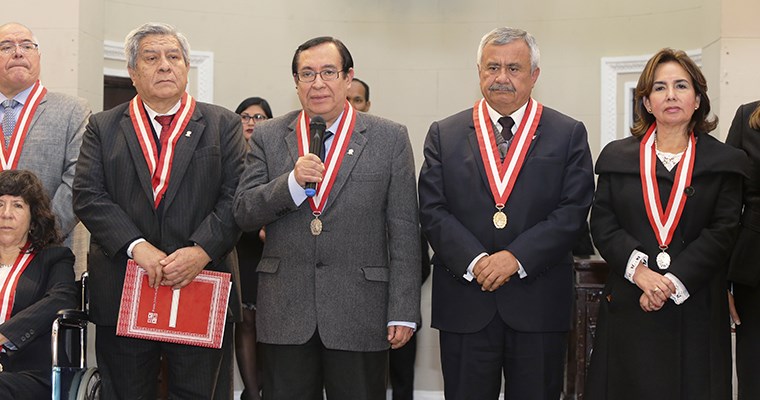 "The court agreed to declare the executing board of the judiciary for 10 calendar days in case of emergency," said the judge at the end of the meeting yesterday.

With regard to the members of the CEPJ who were involved in the latest audios with the suspended judge César Hinostroza, he said that they are now available to their chosen bodies to see their possible expulsion.

He also said that the Plenary Chamber, after analysis of the audios and the level of intervention of the Supreme Judges Héctor Lama More and Janet Tello Gilardi, agreed to unanimously ratify them for the aforementioned governing body when they saw that they were fulfilling their duties and capacities.

It was also decided to request the board of superior and specialized judges, respectively, so that during a meeting on the 27th of this month, they will remove their representatives, Augusto Ruidías Farfán and Rosa Amelia Vera Meléndez.

The head of the PJ indicated that the Board of Deans of the Peruvian Order of Lawyers will also be approached within a maximum period of five calendar days for the case of their representative Pedro Angulo Arana.

At the meeting, it was also decided to delegate to the presidency of the judiciary so that, with the support of the cabinet of advisors, it would be possible in the shortest possible time to carry out the revision of the standards that the functions and competencies of the executive board mentioned above. arrange, as well as its members, and formulate proposals for amendment.

In recent audios, broadcast by the press, Hinostroza contacted members of the CEPJ because they favored the judge María Luisa Apaza, the president of the court that leads the Sánchez Paredes case, with a transfer from the Court of Santa to the courts in Lima or Callao.

In a statement Ruidías said that the transfer was never carried out "neither from the initial admission of the application (2016) nor from the summons of the highest court now suspended (2018)."

"The conversation only indicates an informal treatment, without assuming obligations, without having to ask for extras or other offers, as my style is," he argued.

He argued that, by not having registered any transfer or having accepted someone's recommendation, I can not reject my questions about my functional behavior & # 39 ;.

In another statement Vera Meléndez said that she "at no time pretended to do something irregular" and rejected the approach that was given in the press in this context.

He said he was unaware of the existence of any kind of interest from Hinostroza, who referred & # 39; until recently he was one of us, who knew no suspicion in his actions & # 39 ;.

However, he acknowledged that it was a mistake to have details in the conversation details that did not match, so he apologized to the national magistracy.

Víctor Prado also expressed surprise at the request of the Congress of the Republic for the judiciary to decide on the case of legislator Benicio Ríos, sentenced to seven years imprisonment for the irregular purchase of a plot in Cusco for a sanitary landfill. In Channel N said that it is only possible that the parliamentarian adheres to the punishment imposed on the second authority. "However, the parliamentary immunity committee of the judiciary, chaired by Francisco Távara, is already in court and tomorrow [hoy] will issue a technical statement about what will happen to this Congressman who has already been convicted. "For Prado, the Alliance for Progress Legislature's profession does not prevent him from serving his sentence in prison, but the judge also reported that the Supreme Court of the Supreme Court agreed that the Judicial Ethics Committee evaluated the case of Judge Angel Romero with regard to audios that were broadcast last Sunday.

The supreme prosecutor of internal control intervened with the President of the Sixth High Chamber with free prisoners from Lima's Supreme Court, Juan Gonzales Chávez, when he received a share of a supposed bribe of 30,000 soles that had to be accused of fraud.

The intervention in flagrant led by prosecutor Jorge Bernal Cavero, who together with the public prosecutor Jaime Velarde and police arrived at the seat of the judiciary of block 5 of the avenue Abancay.