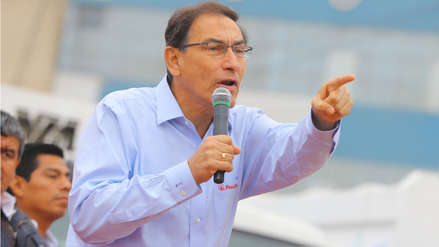 The President of the Republic, Martín Vizcarra, asked Tuesday to the Peruvians to choose hardworking and honest authorities in the regional and municipal elections on 7 October. "The next important task we need to take in Peru on October 7 is to choose hard-working and honest authorities to make the change with us, and it's up to you to make the best decision," he said.

Vizcarra called on the citizens to analyze the candidates and to make efforts to get authorities working in an absolutely transparent way to work. By pointing out that the biggest problem of the country is corruption, it is Head of State stressed the need to have honest people in municipalities, regional authorities and institutions such as the Congress and the Judicial power.

Martín Vizcarra gave this message during the ceremony of delivery of 10 compactors for the management of solid waste in the district José Leonardo Ortizprovince Chiclayo, region Lambayeque. The delivery of this machine is intended to guarantee the public cleaning service in good conditions, for the benefit of about 20 thousand inhabitants.

However, the visit was broken because of the tumult of people who protested in the middle of the ceremony and then before the president to denounce acts of corruption in your district. The security of the president she was forced to quickly climb into the truck, where his delegation waited for him to move to Chiclayo airport and continue his activities in the Piura region.

(With information from Andes)