Mijael Garrido Lecca spoke about Venezuelans in our country [FOTO]

The controversial journalist defended the Venezuelan and attacked those who condemned foreigners in our country, also letting go of her anger on social networks.

"It bothers me a lot to read so many comments against the arrival of Venezuelan to Peru. Do you think they come because the huancaína chip is goodness and the climate of Lima is delicacies? The journalist applauded the critics.

He also explained that foreigners escape their harsh political context. "They escape a communist dictatorship that literally kills them (literally)," he spat out. Mijael Garrido Lecca.

The journalist Mijael Garrido Lecca He has become a leader because of the affection of his followers and the harsh criticism he makes that always creates controversies. 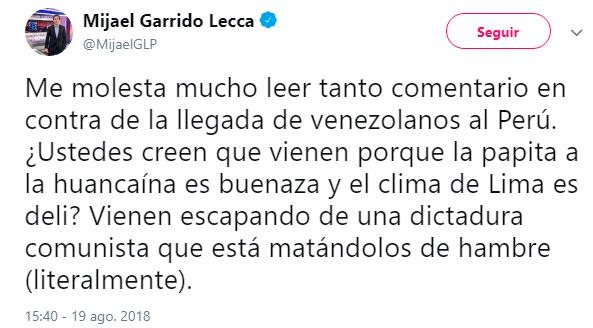