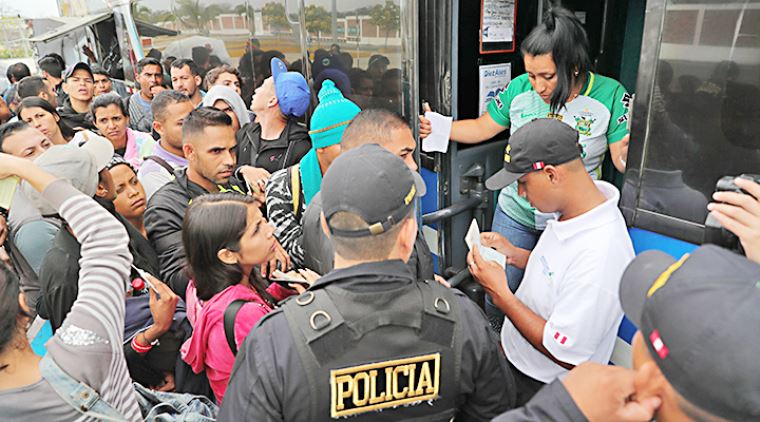 It is necessary to campaign against any form of discrimination and xenophobia in the country, Deputy Minister for Human Rights Rights, Daniel Sánchez, said about the increase of xenophobic views against Venezuelan migration.

"The idea is that the state as a whole is setting up a consistent and sustainable campaign to prevent any situation of perverse interpretation of migration," he told Agencia Andina.

The goal, he said, is to close the road to xenophobia, which could trigger violent actions as they happened in Brazil, which should not happen in any way in Peru.

The senior official stated that the responsible institutions will undertake a number of actions, such as setting up communicative campaigns to inform the public that an orderly migration process yields several benefits for the receiving country.

He stressed that the Ministry of Justice and Human Rights is the rector of the Commission against discrimination, and this space, together with other institutions, should reflect on the situation in which Venezuelan citizens are forced to flee the crippling crisis that their country suffers.

"It is imperative that we, together with other institutions such as the United Nations and the Ministry of Foreign Affairs, Migrations, the Ministry of the Interior, be vigilant.We have to send messages to society about the benefits that migration can bring and prevent xenophobic elements are used in public discourse, "he said.

Regarding the perception of some Peruvian citizens who broadcast negative reports about Venezuelan migrants on social networks, the Deputy Minister recalled that millions of Peruvians have left the country out of necessity and have been well received at their destination because they have made a positive contribution to the growth of different nations.

"For a few and identified criminals can not make generalizations of the entire migrant population coming to Peru," said Sanchez.

Regarding the situation of the thousands of Venezuelan citizens who come to Peru daily through the border post of Tumbes, the Deputy Minister indicated that representatives of the Public Defense area control the circumstances in which these people arrive and if they have a type of assistance.

He emphasized in this sense the need for migrant children to receive humanitarian aid, as well as the thousands of families that are the result of the terrible crisis in Venezuela.

The use of xenophobia against Venezuelan migrants should not serve as a means of trying to win votes, said the vice-president of the Republic, Mercedes Aráoz, who criticized the candidates who spread negative messages against migration.

"We are a culture that is not only a blend of the Andes, the Amazon and the coast, but also the contribution of Africans, Asians and Europeans who have enriched us and we can hardly accept that a candidate uses that as an instrument. of candidacy or political propaganda. "He told the Andina Agency in reference to the candidate for the Mayor of Lima Ricardo Belmont.

Aráoz regarded Belmont's attitude as "a bad sight" of the reality of migration to Peru.

The Peruvian caucus congressman for the Kambio (PPK) said that Peruvians are not xenophobic, because most know that it comes from migrants, both nationally and internationally.

"That speech has to be cut because it is not part of Peruvian culture, which is appreciated in the world because of its receptiveness, warmth and generosity," he said.

The Ombudsman's Office expressed its complete rejection of xenophobic manifestations and acts of discrimination against Venezuelans in Peru and demanded an integral migration policy that respects human rights in the context of international migration. Through a statement he recalled the need to take measures to confirm the principle of equality and non-discrimination in society, in the current context of Venezuelan migration to Peru.

"The recently adopted decisions of the countries in the region show the lack of an adequate response to the humanitarian crisis that Venezuela is experiencing," he said.

Moreover, these decisions are in contradiction with the IACHR recommendation (resolution 2/18) on the adoption of measures to ensure the entry of Venezuelan citizens into the territory "to seek international protection or to meet humanitarian needs", he's ready. He recalled that States maintain international commitments to protect vulnerable populations, such as unaccompanied or unaccompanied children, refugees, and so on.

The Ministry of Health is vaccinating free of charge against seasonal flu or flu, and other diseases, Venezuelan citizens entering Peruvian territory after processing their access to the Binational Border Care Center in Tumbes.

Vaccination is carried out by staff from the Regional Health Directorate of Tumbes that gives priority to pregnant women, children from 7 months, older adults and people with diseases that affect their immune system.