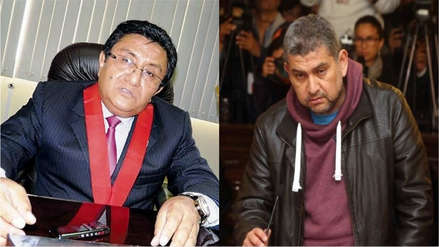 A new audio again commits the former president of the Superior Court of Justice of Callao, Walter Ríosand the suspended supreme judge César Hinostroza. A recording broadcast by America news he notes that both magistrates supported the former provincial court, Samuel Sánchez Melgarejo.

Sánchez Melgarejo has been investigated by the Office of Judicial Control (OCMA) by functional misconduct and is linked to the detained ex-governor of Ancash, César Álvarez. He served as President of the Santa Superior Court of Justice (Ancash).

Resigned after publication of audio

The latter took up Wednesday after the portal IDL Reporters will reveal audio in which coordinates between Sánchez Melgarejo and Gianfranco Paredes, consultant Walter Ríos.

The recordings show the efforts he has made Sánchez Melgarejo so that two of their closest friends manage to go to work in the Superior Court of Justice of Callao.

The people who benefited from these efforts were Gabriela Huillca Andrade, described by the judge as a "very distant" relative, and Miguel Ángel Espinoza, a citizen of the magistrate.

Conversation between Walter Ríos and his adviser Gianfranco Paredes

Walter Ríos (WR): I just got Dr. Hinostroza called, he tells me that there is a leg of the Supreme that must be supported, you know that.
Gianfranco Paredes (GP): Doctor Melgarejo Sorry, Sánchez Melgarejo.
WR: Oh, ya, ya, ya, ya, ya. Sánchez Melgarejo.
GP: I said yes, that I have already communicated with you, that I have noticed, what is going on and what I am going to see. Yes, I told him.
WR: But call him to Dr. Sánchez Melgarejo, tell him: "Brother, the president has already told you," already?
GP: Yes, doctor.
WR: P … Why does Sánchez Melgarejo go to César? Dammit! That's what I do not like. Yesterday I tell you in your face, right ?: "Give it for granted". P … mother, I'm going to … those people, fuck! If you're already talking to me, p … mother. And he goes to the man, fuck. That is, what am I? I am for the h …