Reconstruction work will enable the development of northern regions 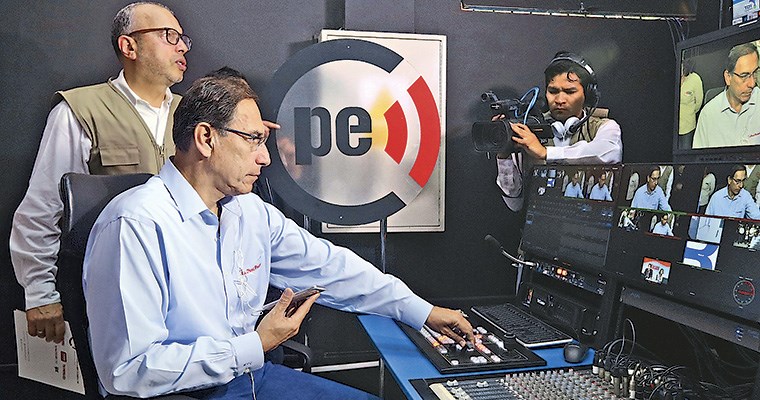 President Martín Vizcarra said that the reconstruction after the El Niño Costero phenomenon will be a development opportunity for Piura and the northern regions that have been affected.

"The reconstruction can not wait," he said in Piura. "As a government we fulfill government for five months, during which time we were able to develop technical files that we did not have," explained the president.

"Now we have them [los expedientes] and by means of a standard that we have been able to achieve with the faculties, we can carry out faster ", the head of state added.

He said that concrete goals should be revised at this point in his administration, and that is why the reconstruction is accelerated by initiating and completing the works. "We started working with really important works," he said.

Another measure that works parallel to the reconstruction, he said, is the count to identify all those who have been injured.

He also announced that the government will correct the count of the victims of El Niños Costero to include affected families who were not included in the relevant register.

From Cura Mori, in Piura, the president explained that, when the first assessment of the victims took place, in 2017 many families were omitted from the list, perhaps because of the urgency or urgency of that moment, for what corresponds Correct now that error .

The correction will be possible thanks to the Cadastre or Damage-II Stage-Cofopri, launched yesterday in Piura, one of the most affected by the natural phenomenon that affected the population of the north of the country.

"That mistake had to be corrected and now we are here with Cofopri [Organismo de Formalización de la Propiedad Informal], precisely to correct that error. If the authority is wrong, it must correct its error, "said the head of state.

The president has fulfilled a series of activities in Piura. There, in the facilities of the Institute for Radio and Television of Peru (IRTP), the Digital Terrestrial Television signal system opened, which will also work from that date in Chiclayo, Trujillo, Cusco, Huancayo and Arequipa (see box)).

In Paita, President Vizcarra presented the second road on the Piura-Paita highway, which is part of the multimodal axis of Amazonas Norte and benefits more than 500,000 inhabitants of the province of Paita and the surrounding areas.

This new transport route has two lanes of 3.6 meters wide, verges of 1.5 meters on the left and 3 meters on the right, next to drainage structures, such as sewers. With this work, traffic in this area is relieved by reducing the travel time from 60 to 40 minutes and ensuring safe and quick access to the port terminal of Paita.

Similarly, the president provided the restoration work on the breakwater at the Paita port terminal, which will improve the terms of service.

The works of nautical signaling and power extension of electrical substations required an investment of more than 31 million soles. In addition, two mobile cranes have been purchased.

Finally, the Head of State began the work of Piura's High Performance Board in the Catacaos district and stressed that his government works so that all students in Peru have access to quality training, because this is the basis for people's progress.

The Piura COAR project is one of the 52 educational infrastructure works that form the investment portfolio of the Ministry of Education.

"The digitization of the signal connects the Ministry of Culture, via the Institute for Radio and Television of Peru (IRTP), to the production of informative and cultural content from the various regions of the country, so that they can have a broader audience. reach, "said the sector owner, Patricia Balbuena.

From the IRTP facilities in Piura, Balbuena noted that this signal will also enable the IRTP to pass the emergency warnings of the National Institute of Civil Defense (Indeci) in cases of tsunami threat and other types of disasters, such as floods, landslides and fires. Unlike analogue television, digital terrestrial television (DTT) will allow transmission without noise or interference from HD HD video signals. Likewise, users have the opportunity to enjoy their television programs on mobile phones or tablets anywhere or even on the move, thanks to the portable mobile reception provided by this signal. The activity carried out in Piura is part of the Master Plan for the implementation of digital terrestrial television, defined by the MTC.

With the implementation of Digital Terrestrial Television, the Ministry of Culture is reiterating its commitment to contributing to the well-being of Peruvians, as well as strengthening our national identity, with a view to the bicentenary of Peru's independence.

To date, the DTT system in Piura has nine channels that transmit digital signals, of which more than 579,425 citizens from the cities of Castilla, Catacaos, Cura Mori, La Arena and 26 October benefit. As the Ministry of Transport and Communications, we hope that the implementation of DTT will be continued for the benefit of citizens, said Deputy Minister of Communications, Virginia Nakagawa.

The Board of High Performance (Coar) Piura is being built with an investment of 65 million 693,400 soles via the form of Works for Taxes.

President Vizcarra and Minister of Education, Daniel Alfaro, toured part of the area of ​​more than 34,000 square meters in Catacaos, where about 300 students from the last three classes of high school will study.

During the opening ceremony, President Vizcarra confirmed that it is the duty of the state to guarantee a quality public education and to create optimal conditions for students to study.

Minister Alfaro said that the Coar spaces integrate the entire community and that students from other educational institutions can also make use of the modern sports infrastructure.