State advertising: leaving the Constitutional Court to vote against the law 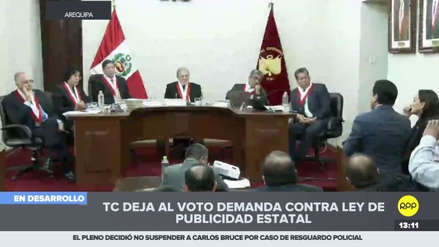 the Constitutional Court (TC) left to the vote the unconstitutional claim filed against the law that prohibits state advertising in private media, the so-called Mulder Law, in an allusion to the head screw.

The aprista Mauricio Mulder and the congressman Gilbert Violeta Representative of the Prosecutor-supported their positions for the full TC, which now must decide on this controversial rule.

In his speech the official said that Mulder's law is the "materialization" of the threats of former Congressman Luis Galarreta, which in some of the questioned statements spoke about "means mermeleros", according to the correspondent of RPP News in Arequipa, where the session was held.

In addition, he said that the application of the rule has limited access to information for a large part of the population and has prevented several portfolios from promoting various campaigns related to health, education and social programs.

Meanwhile, Mauricio Mulder He wondered if the government had not invested money in expanding mobile networks across the country instead of continuing to address media ads.

According to his view, the state is "not in favor of private companies" and has denounced it some media submit their editorial rule to the payment of state advertising, our correspondent assured.

The members of the TC have requested the documents from both parties support their positions.

The law in debate

The plenary session of the TC held a meeting in Arequipa to see the public two conflicts of jurisdiction and nine unconstitutionality procedures, including the law against state advertising in private media.

The TC had decided to collect the unconstitutionality lawsuits against the so-called Mulder law, to continue his process in the same process. It is about the lawsuits filed by a group of congressmen and by the executive. In the opinion of the TC, both lawsuits contain similar arguments that support them, so they have to be collected.