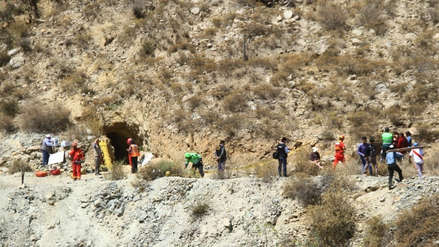 The student Tony Coaguila Guerrero, 23, was found dead by a group of social workers who entered the mine "Condori".

The young man would have died as a result of the injuries he sustained after falling on a slope this morning in a mine shaft of this mine that was closed, located in the Arequipa district of Yarabamba.

The rescue team, consisting of firefighters, police and Red Cross agents, had to walk two hours in the mine to go to the place where the student had suffered the accident.

The arrival of the representative of the prosecution is expected to allow the rescue of the body to the outside of the mine.

It was known that the young people I studied Topography at the Steve Jobs Institute and that he went to the place with seven classmates and a teacher as part of the Safety course.

Admission to the adit was closed, so the group students have broken the locks to enter the mine, Due to the lack of illumination and ignorance of the place Tony Coaguila fell off a slope.

After the fall, their companions heard their screams for help, so they called the firefighters and the police.

Police officers arrested the teacher and were accused of culpable murder.