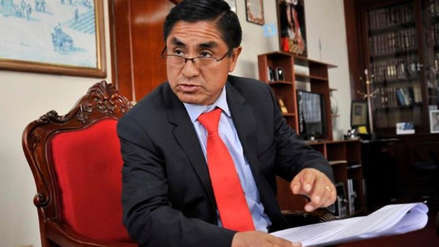 The special penalty room of the Supreme Court of Peru ratified the obstacle of leaving the country dictated against the suspended supreme judge César Hinostroza because it is one of the key figures in the vast network of judicial corruption discovered in the highest levels of the country's legal system.

The court declared unfounded the appeal that the magistrate had brought against the measure imposed by the court since 13 July. Supreme Court of preliminary investigation, reported on Saturday Judicial power in a statement. The decision prevents Hinostroza from leaving Peru for the next four months, because the judges are of the opinion that there is a danger to the researcher's flight.

The ruling of the Court ruled that the obstacle to leave the country is a measure appropriate to Hinostroza because he does not yet have a working root, because he is suspended and "because there is a record that high officials, against serious accusations they have the investigations avoid ".

Hinostroza is facing a preliminary investigation in the Prosecutor for the alleged crimes of specific passive bribery and specific active bribery at the expense of the state.

Hinostroza was one of the leading actors in the audios broadcast in the media, revealing a network of favors and influences in which other members of the judicial system, businessmen and politicians participated.

The magistrate has been heard on these recordings to offer acquittal to a rapist who has been convicted of raping a minor aged 11 and also to coordinate a meeting with a "Mrs. K" of the "force number one", which allegedly refers to Keiko Fujimori, leader of the Popular Force party, the first political power in Congress.

At the time when Hinostroza agreed to that meeting, he presided over the Second Transitional Criminal Chamber of the Supreme Court, where an appeal had been made by Fujimori and her husband Mark Vito to investigate a prosecutor's investigation for alleged irregular financing of their election campaigns. unloading had to be resolved. (EFE)