The Constitution Committee approved first articles for the two-chamber community 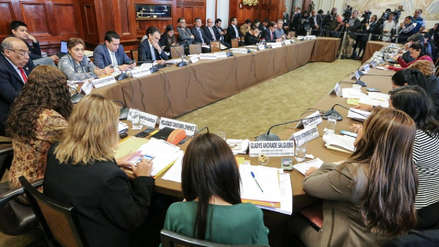 On Monday afternoon, the Constitution Committee of Congress approved the first five articles of the prediction referring to the law that proposes the return to the bicameral system.

The chair of the working group, Rosa Bartra, asked the congressmen to work together to reach a consensus and to approve the opinion that contains more than 200 pages and that includes different projects about the bicameral. This document attempts to change 37 articles of the Constitution.

The executive's proposal means that Parliament returns to have two cameras, one of the 100 delegates elected by microdistricts and another with 30 senators, who would be elected by the macro district.

Of the legislative reported that the approved articles were 56, 57, 82, 85, 86 and 87. All are related to the approval of treaties by the Chamber of Deputies and the Senate, as well as the ratification of the President of the Republic.

Moreover, it was agreed that After approval, the most controversial and controversial articles will be discussed such as the number of deputies and senators that would integrate both chambers.

Attitudes during the debate

Of Fuerza Popular Congressman Miguel Torres said that the return of the bicameral is a "big mistake", but he was willing to work together. Meanwhile, the parliamentary Luz Salgado He said it was time to discuss the prediction.

Meanwhile, Marisa Glave (New Peru), Juan Sheput (Peruvians by the Kambio) and Mauricio Mulder (APRA) agreed that the debate should be started because of the number of articles covered in the forecasting study.