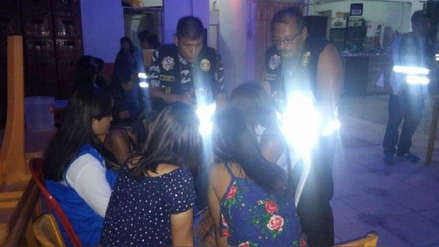 the National police He caught four people, including two men and two women, because he reportedly exploited labor and sexually nineteen women, including eighteen Venezuelans and one Peruvian, the Interior Ministry said. Peru.

The women worked in a bar called "Al fondo hay sitio" on the beach zorritos, from the northern region of Tumbes, bordering Ecuador, the main gateway for the thousands of Venezuelans arriving every day Peru. The alleged victims and the detainees were transferred to the Criminal Investigation Department (Depincri) of the national police in Tumbes.

The procedure continues with the Public Prosecution Service in the Crime of Trafficking in Human Beings Tumbes, the National Superintendency of Labor Inspection (Sunafil) and the department headquarters of Migrations Tumbes, to identify the migration situation of Venezuelans.

The rescued women sought refuge in the program for the protection and assistance to victims of the prosecutor's office, while the investigations are being continued. The Public Defense Department of the Ministry of Justice and Human Rights assumed the legal defense of the eighteen Venezuelans.

In addition, the special prosecutor for human trafficking Tumbes, responsible for Roberto Villacorta, started the preliminary investigation into the crime of human trafficking in the modality of labor exploitation against the detainees, who own the property and three of his employees.