Timeline | Cusco suffered a series of accidents in the tourism sector 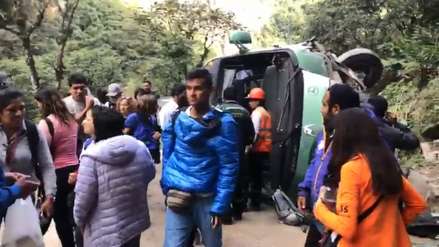 A series of accidents in the tourism sector has been registered in Cusco so far this year. These apparently worry about the tourists who are looking for greater security. The last one is registered this Friday and has not died. A bus from the company Consettur Machupicchu S.A.C. The ship got 30 passengers on board the Hiram Bingham road that connects the Sanctuary of Machu Picchu with Aguas Calientes.

As a result of the overthrow, eight people were injured, although not seriously. In addition, a woman with 16 weeks' pregnancy of Argentinian nationality had to be transferred to Cusco in distress, before a possible threat of abortion.

Another accident that affected tourism was registered on July 31, when two trains collided on the Ollantaytambo-Machu Picchu route. The impact left 31 injured, 5 of which were serious.

As reported by the National Police, the collision took place after a group of people had taken the railway on the road to Machu Picchu. This forced the company train Inca Rail being held for more than an hour. "In the absence of coordination with the company car Peru Rail, who left at 8.00 am from the Ollantaytambo station, was hit by the back ", they said in a statement.

On April 4, the tourist Milushka Marisella Pacheco (29) and the assistant of the tourist guide, Vincer Quispe Reyes (23) died when they were practicing zip lines. The cable with which they held broke and both fell into an abyss in the Maras district.

Four months earlier, in January, a Spanish tourist also died under similar circumstances. The body of Nathaly Salazar (28) has not yet been found, but the prosecutors of his disappearance, Jainor Huillca Huamán and Luzgardo Pillco Amau, have been in detention for nine months in Quencoro prison.