Tumbes: Warn for informal routes that Venezuelans could use for a passport requirement 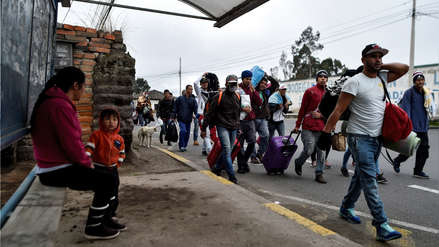 The municipality Tumbes He warned of the informal routes that Venezuelan citizens could use to enter Peru from Ecuador and Colombia, given the passport requirement that will apply from August 25.

Tumbes & # 39; minister, Henry Garay, said that there are two areas they can enter, a trading area and another agricultural area. The authority mentioned the districts of La Palma and Matapalo. "There should be one here very strategic work of migrations, so that the formal income for our country is maintained"He said to it RPP News Henry Garay, municipal administrator of Tumbes.

Given the limitation of Venezuelan immigrants who do not have a passport, Garay points out that they can informally try to gain access to our country through other border points.

A special team of RPP He moved to one of these possible informal transit routes in the hamlet of Las Palmas, in the province Zarumilla, located at 20 minutes from Binational Border Service Center (CEBAF).

At that moment, a flow of Ecuador divides from Peruvian territory. Although it is not far from a police station, it is one of the places that is referred to as a possible informal route to enter Peru.

Given this possibility, the national superintendent of migration indicated that there are four border control points Tumbes, located in the CEBAF, Zarumilla, Carpitas and Pedro Canga Airport, all under police surveillance.

"In all countries there will always be the possibility that some people are trying to bypass immigration checks," he added at a press conference.

At present, large groups of Venezuelan citizens continue to come from the borders with Ecuador and Colombia to Peruvian territory, fleeing the social and economic crisis in his country.

Different traders and residents of Green watersIn Zarumilla, they assure that they agree with the government's control of Venezuelans' entry, but they fear that the passport application will end with encouraging illegal access.

"It is easy to enter the country (in this area), it is not like in other borders, you can go to the countryside, to the farm and" illegally to Peru ", he told the AFP Luis Alberto Gutiérrez, who works as a money changer in a street less than 100 meters from the border bridge.

Crossing borders via these routes would not only be a violation of the Peruvian norm, but would also expose immigrants to various crimes. Some think that the Venezuelan exodus can stimulate migrant smuggling, as in Mexico and Central America.

"There will be so-called" coyotes ", which the Venezuelans denounce because they brought them to Lima with deception," said trader Giannella Jaramillo.