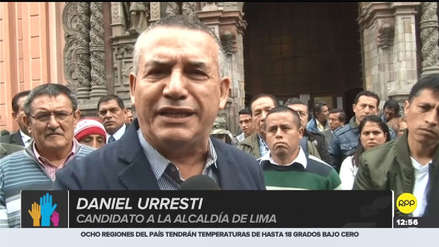 The candidate for the Mayor of Lima for Podemos Peru, Daniel Urresti, has announced Sunday to collect signatures so that he can referendum brought up by the executive, to answer a question about whether or not to close it Congress.

In statements for RPP News, Urresti He said that he met with a group of police and retired military personnel to raise this question during the referendum, because of the "systematic corruption" in this power of the state.

"We have decided for the first time in the Republican history of Peru no longer use the weapons he has entrusted to us when we are active, the country, but we will use the tools that constitution and collect the necessary signatures so that in the referendum that will be carried out the question is included: this congress must be closed, new congress elections must be convened immediately. "

He added that on Monday they will buy the first kit for the National Office for Electoral Processing (ONPE) and thus initiate the collection of signatures, for which he encouraged police and army retired across the country to sign up.

"We are going to buy the first ONPE kit tomorrow (…) We are thousands of people across the country and we have a lot of acceptance right now, many people willing to voluntarily fold this crusade we have created the e-mail: [email protected], so that everyone who wants to participate voluntarily can write us and send the documents so that they can collect signatures ".

The referendum proposed by the President of the Republic, Martín Vizcarra, includes the question of whether the re-election of congressmen should be continued. In this respect, the president of the Congress, Daniel SalaverryHe noted that they have a different approach in this area and that they can not be pressured to accept it.

"We agree that the reform of the administration of justice should be promoted and accelerated (…) but We differ in that you can not push and our approach is different"He told the newspaper The trade.