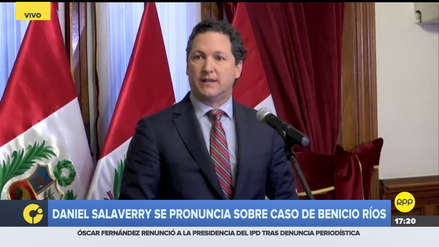 The chairman of the congress, Daniel Salaverry, assured this Monday that the parliament will quickly request the waiver of immunity for the parliamentarian of Alliance for Progress, Benicio Ríos, immediately after the Judicial power Determine your legal situation.

He explained, so far the Judicial power he did not submit the request to submit the procedures for waiving immunity against rivers. He added that if the document arrives, it must be accompanied by a file from the Supreme Court, the Congress Immunity Survey Committee will organize a session to see if it is admitted or not.

"It is ultimately the committee that makes the decision to admit or not allow this request, to admit that it is being submitted to the plenary and I I undertake to immediately convene an extraordinary plenary session to take the final decision on this waiver of immunity."It also said member of Fuerza Popular.

The parliamentarian Benicio Ríos of Alliance for Progress presented himself to the Congress of the Republic on Monday. He was absent for a few months after he sentenced him for seven years for the crime of collusion, aggravated by acquiring land with overvalued costs when he was mayor of the province of Urubamba in Cusco.

They are waiting for documentation

He added that the Congress he can not officially cancel the immunity of a congressman and regrets that the documentation of the Judicial Power has not been sent so far to begin the corresponding procedures.

Salaverry has also ruled out that the government is planning to protect the congressmen. He explained that Immunity allows congressmen to exercise their function of control and political control without fear.

"We do not exclude ourselves from discussing this or any other matter, as I have explained, Congressmen can enforce their role of control and political control without fear of persecution or mafia or political persecution."

Judgment of the Judicial Power

Meanwhile, the parliamentary immunity survey of the judiciary has announced that they were already analyzing the case of Rivers.

Via a message on the Twitter account of Judicial power They have informed that the request will be answered as soon as possible.