Video Humberto Lay: "Surveys are relative, I have faith" 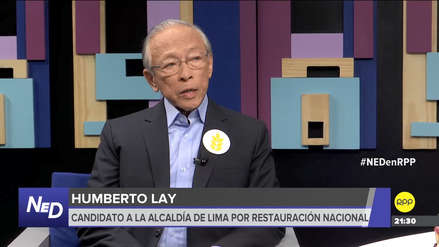 The candidate for the municipality of Lima for national restoration, Humberto Lay, assured Tuesday that he was not worried about the fourth place he took in the recent research Ipsos faced with the elections on 7 October.

In statements for Nothing is said from RPP NewsLay said that the surveys are "relative" and that he maintains the confidence that he can reverse the current figure in the remaining time.

"Surveys have to be taken with caution, they are relative and I have confidence, because that is what matters, what each candidate proposes, what vision they have for chalk and yet the population learns to listen to the candidates ".

As he explained, one of the current problems of the city is the division that exists between the city government and the districts. In that line, what Lima needs is a mayor who is a dialogue and one of the 42 district mayors to address the problems the capital has.

"One of the big problems of chalk and of our country at the moment that division is that permanent conflict, violence, conflict and this happens at national level in politics and is concentrated in Lima. We see a Lima divided into 42 districts plus the housing, mayors fighting together, a provincial mayor separated from the mayor of the district, often far away from them. "

He added that his campaign was sober and said that the candidates who spend millions on their campaigns are suspicious because the salary of a mayor in four years does not justify an investment of that level.

"Spending millions on a campaign and that makes that candidacy suspect in itself, because who spends millions on a municipal campaign knowing that over four years the salary of a mayor will not cover a fraction of those millionsThat in itself is something suspicious, that's why we do not want to spend millions. We do things with a lot of limitations, but mainly by presenting the proposals. "