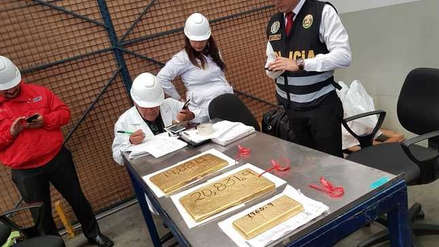 the National police of Peru (PNP) seized on Monday 48.67 kilos of gold immobilized in the warehouses of a company at the airport of Faucett, in the Callao.

the Ministry of Internal Affairs reported that the operation was carried out in accordance with the resolution of the Fourth National Preparatory Investigation Court regarding the investigation against Sofía Bejar Giraldo, Alipio Bejar Giraldo, Adrián Huamán Quispe and the legal entity Veta de Oro of Peru SAC, for the crime of money laundering of money

Around ten o'clock in the morning, within the warehouses, the team continued to open three polyethylene bags with a gold bar in a rectangular shape. In situ, the respective expert test was carried out with a field test for which positive tests were carried out gold with a weight of 48.67 kg. The result of the assessment resulted in 1 & # 39; 910,297.50 dollars.

"It was continued with his seizure and subsequent sealing for his respective chain of custody," the ministerial ministry said in a statement.

The seized gold was transferred to the vaults of the Bank of the Nation in San Borja with the support of agents from the Directorate Road Safety and Traffic Safety and the SUAT (Tactical Actions Subunit).