Video Officer is attacked by an alleged bribery in Arequipa 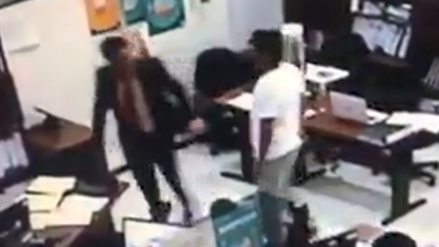 The Planning and Budget Manager of the District Municipality of Mariano Melgar in Arequipa, Eduardo Mendoza, was attacked by a person who demanded the return of an assumed bribe of 40 thousand soles.

The attack took place yesterday morning when Roberto Zevallos Vera entered the office and went directly to Mendoza's office and hit him while demanding the return of an alleged kickback for a work that would not have materialized.

The workers of the office, surprised by the attack, did not intervene and only succeeded in filming with your cell the aggression. The facts were also recorded in the security cameras of the municipality.

After the attack the officer went to the police station to report the incident.

In turn, the mayor of the municipality, Edwin Martinez, said they would submit two complaints: the first to the aggressor for the scandal within the municipality and the second to the prosecutor for corruption, reported by the attacker.