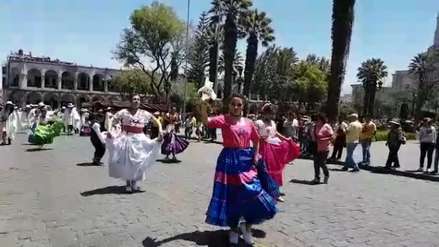 A colorful parade through the streets of the historic center of Arequipa this morning to commemorate the World Tourism Day, celebrated on September 27th.

More than 500 dancers from different universities and companies related to tourism They participated in the activity organized by the provincial municipality of Arequipa.

Locals and tourists enjoyed dancing such as the Wititi, Pausiña de Caylloma, San Isidro Labrador, the dance of the shrimp, Camile, Montonero, carnival of Arequipa, among others.

The dances were the attraction of the tourists who were through the Historic center of Arequipa declared a World Heritage Site by Unesco.