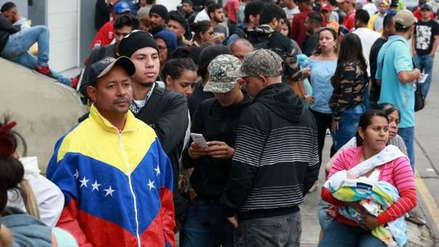 The non-governmental organization Venezuelan Union in Peru a letter to the chancellery to evaluate access to the country, without a passport, children, pregnant women, adolescents, chronically ill and older Venezuelans.

The letter, addressed to the Minister of Foreign Affairs, Néstor Popolizio, asks "for strictly humanitarian reasons" to allow access to this vulnerable human group that "for various reasons" does not have a passport.

They also claim that "they understand the various motivations that have led the Minister of the Interior to take restrictive measures in the field of immigration control", in connection with the recent announcement that Peru will apply for a passport from August 25 for all Venezuelans who want to go into the country.

The head of the Peruvian interior described the new measure as "a technical problem" to "ensure the safety of Peruvian and Venezuelan citizens, while this document provides the police with" adequate registration "of fingerprints and photography.

In that sense, the Venezuelan Union in Peru said that it "recognizes the need to ensure the security of the internal order in Peruvian territory", although it expressed "concern about the fact that processing a passport in Venezuela has become a real Via Crucisespecially for those with the lowest resources ".

They also asked for an evaluation migratory regularization of Venezuelan children under the age of nine, who have only arrived in the country with a birth certificate because they do not meet the legal age to gain access to an identity card.

The letter, signed by the president of the organization, Óscar Pérez, also ruled out that the measures adopted by the Ministry of the Interior were "hostile or xenophobic" because "the Peruvian state has at all times shown unprecedented and powerful decisions, the affection and solidarity "for the Venezuelan people.

According to figures from the National Migration Superintendence, 80% of Venezuelans entering Peru have a passport; and 20% enter with identity card.

The Peruvian government has also announced that Venezuelans entering the country until October 31 will be able to Temporary Permit of Permanence until 31 December, by shortening the original period for the application of this permit.

On Saturday of last week, Peru recorded a new record number of Venezuelan citizens that entered Peru in one day, to 5,100 Venezuelans. This figure left behind the previous record, recorded last May, when only 3,700 Venezuelans entered the Peruvian territory one day. (Information from EFE)