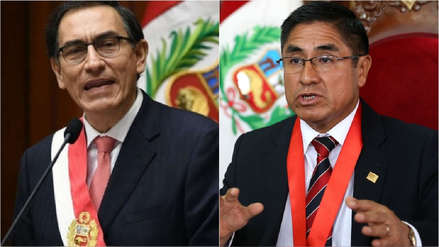 The President of the Republic, Martín Vizcarra, regretted that the Permanent Committee of the Congress refused to accuse the suspended supreme court César Hinostroza to criminal organization & # 39; Los Cuellos Blancos del Puerto & # 39; to integrate.

As he remembered Vizcarra, Callao prosecutors who started investigating the alleged criminal network have gathered convincing evidence of who they are, but this information was not taken into consideration when it arrived in Parliament.

"With these arguments [fiscales] it rises to Congress to give their opinion and define, and in one way or another, the main judge of this criminal organization of White Collars pleading for the highest court [César] Hinostroza. It is really worrying. "

In that sense he said that he expects the meeting of the Congress to reconsider the votes. "I hope that when I attend the plenary meeting, every congressman will make a detailed analysis because it will be absolutely clear who wants to fight corruption and define a small sanction, and if we want to fight corruption, we have to be drastic," he said. .

"The congressman must be responsible for his actions to his people, when they vote in plenary when Judge Hinostroza is part of a criminal organization, if he says yes or no, he must go to his city to report on the mood. I want to see who wants to fight corruption and who wants to avoid this effort that we have tried"he was ready.