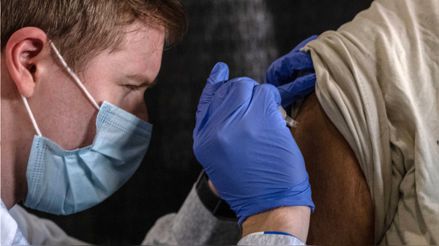 United States It could be the first country to launch one of the most ambitious vaccination operations in history – to distribute and inject up to 600 million doses of the Covid-19 vaccine in a few months.

While the world has been running massive vaccination campaigns such as those for measles or the common flu for decades, three simultaneous restrictions complicate the task this time: the pressure of the calendar, the fact that most vaccines require two doses, and cooling at low or even very low temperature of certain vaccines: -70 ° C for those developed by Pfizer and the German BioNTech, intended to be the first to be authorized in United States, 2 to 8 ° C (the temperature of a refrigerator) for common flu vaccines.

In the United States, doses of Pfizer They are said to come from the final fill plant in Kalamazoo, Michigan (another is in Puurs, Belgium).

The group designed special boxes for shipping, 40x40x56cm, containing dry ice. Each box contains 975 bottles with a capacity of five doses each, for a total of 4,875 doses.

Six trucks will leave Kalamazoo every day to deliver doses to airlines such as Fedex, UPS and DHL, which will distribute them quickly: within one or two days United States and in three days in the rest of the world, Pfizer told AFP. Twenty daily cargo flights will distribute future doses around the world.

Fedex told AFP it had obtained permission from the Federal Aviation Administration to carry more dry ice on board its Boeing 767 and 777. Dry ice is solidified carbon dioxide, the sublimation of which (the transition from solid to gaseous state) can be dangerous to the crew.

Once at the place of destination, each box may be opened briefly a maximum of twice a day.

“This is tailor-made for large vaccination centers,” Julie Swann, a pandemic response expert at the State University of Washington, told AFP. North Carolina. But not to doctor’s offices or pharmacies.

In the beginning, Americans will likely have to drive to hospitals and perhaps large parking lots, as is the case with clinical trials being conducted today, he explains.

An important precision is that the doses can remain in the refrigerated box for up to two weeks. Hospitals do not need a special freezer. “We don’t recommend that hospitals and clinics buy ultra-cold equipment,” said Janell Routh of the Centers for Disease Control and Prevention (CDC).

The American pharmaceutical company Moderna is also developing a vaccine that is stored at -20 ° C. A normal freezer is sufficient.

It is the second vaccine to be purchased in larger quantities in the United States and the federal government will organize its distribution (free) between states and territories through the distributor McKesson. Each jurisdiction will then decide how the doses are distributed among hospitals, pharmacies and doctor’s offices, as well as universities or companies.

It’s a decentralized scheme, like the one used during the flu pandemic H1N1 in 2009.

“The federal government does not intend to touch a single dose of vaccine, with very rare exceptions,” and distribution will be left to local governments, said Paul Mango, one of the officials responsible for Operation Warp Speed. (Maximum speed).

The goal: to deliver vaccines to the “most vulnerable” by the end of December, to health workers by the end of January, and to the rest of the population there in early April.

Moderna, AstraZeneca, Johnson & Johnson, Sanofi and other biotech companies They also expect their vaccines to be safe and effective, which will add to the complexity of global logistics.

Shipping company DHL estimates that it will cost 15,000 flights and 15 million refrigerated packages to deliver worldwide in two years.

As for developing countries, there is no hope of taking advantage of the first refrigerated vaccines, Prashant Yadav, a health logistics expert at the Center for global development.

They will have to store large quantities of vaccines on the refrigerated packaging after the two-week limit. But -80 ° C freezers, Yadav says, cost five times more than standard freezers and are only made to order. (AFP)

– ‘Espacio Vital’: what is pandemic fatigue and how can it be prevented? Dr. Elmer Huerta replies: