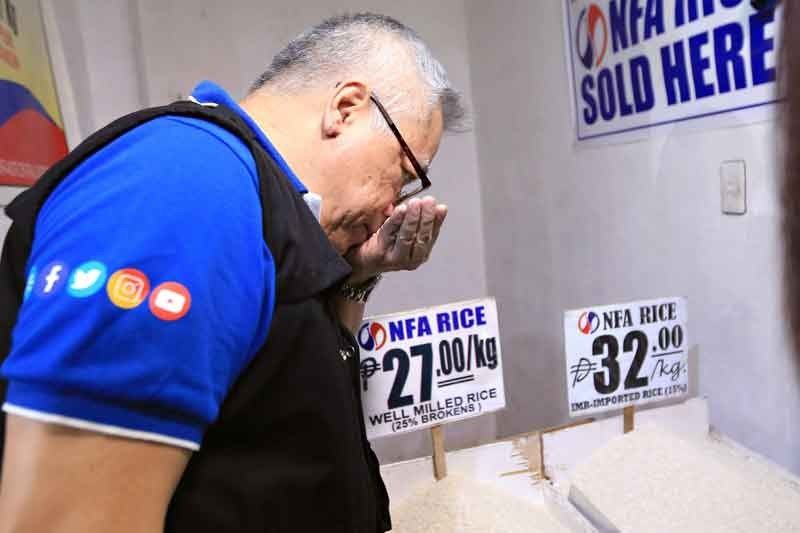 ZAMBOANGA CITY, Philippines – The rice crisis in Zamboanga is "officially over" when the supply starts to stabilize, said agricultural secretary Emmanuel Piñol yesterday.

Piñol made the statement after meeting with local government officials from the Zamboanga Peninsula and the island provinces of Basilan, Sulu and Tawi-Tawi, and executives from the Ministry of Agriculture (DA) and the National Food Authority (NFA) in addressing the problem of the rice scarcity.

A boat loaded with 180,000 bags of rice, docked yesterday in the port of Zamboanga.

Piñol said that local leaders have decided that extra allocation will be given to the three island provinces, each with 20,000 to have a stable rice supply. Zamboanga has 80,000 bags.

"This means that the city will only receive rice supplies from the NFA, which is good for 13 days that will actually end the rice crisis," Piñol said.

Zamboanga Sibugay Gov. Wilter Palma said that the harvest started in the province and that the products are delivered to Zamboanga City.

"I am happy to report to the President that the crisis is over," Piñol said.

"I never thought this would end today, everyone joined forces and thought of this great news that would please not only the people of Zamboanga but also the president, who from today will start loading the boat laden with rice, the rice crisis of Zamboanga is over, that is the biggest news of today, "he added.

However, Mayor Maria Isabelle Climaco-Salazar said that the city will be in disaster for another 60 days.

Isabela City in Basilan was also declared a disaster 60 days after the rice shortage.

Salazar said that the statement is contained in a resolution of the city council and she will issue an executive order for the price ceiling monitoring in the city.

Piñol explained that rice smuggling was the cause of the rice crisis in the city.

"As we all know, rice smuggling has been a way of life in this part of the country, and while we smuggled it into the government, people on the island viewed it as part of their traditional business practices," he said.

Piñol said that while the rice crisis is over, there are programs for the long and medium term that the DA will perform.

As part of the long-term program, DA committed to develop a 1,000-hectare demonstration farm in the relevant LGUs, including Zamboanga City, Basilan, Sulu and Tawi-Tawi. The DA finances and operates the farms.

The demonstration farm will also serve as a rice production center.

Piñol said the DA and local government officials president Duterte will also propose the establishment of rice trading centers in the island provinces of Sulu and Tawi-Tawi, so that there will be a stable rice supply in these areas.

He said that the amount of rice that is supplied will be based on the consumption per capita of the two island provinces or that about 80 percent of the local supply offers sufficient guarantees to be implemented.

The DA-chef also promised a loan of P100 million to Zamboanga Sibugay, because he is impressed by the Palma program to provide loans to farmers who are committed to organic farming.

"The allocation will help them boost rice production in the region and this is also a sign from the DA to Zamboanga Sibugay for helping Zamboanga City," Piñol said.

NFA chief does not resign

Meanwhile, NFA chief Jason Aquino has decided to stay in his post despite calls for him to step down on the still unresolved issue of rice stock and high prices of the raw material in the market.

Senators urge Aquino to resign due to the fact that the NFA has not reduced the prices of rice and has reduced scarcity in some areas, despite imports.

But Aquino remained steadfast and called on interested parties to "get out of their comfort zones, go to the field and see the cause of the current rice and other problems."

"My position depends on the trust of the president, we have quietly done our work, we do not create it, I am not a person with a smooth tongue who can spontaneously give empty talks to make an impression," he said. .

"I go to the field to mix with local officials, talk to the locals, feel their pulse, know their problems and offer solutions instead of empty promises," he added.

The head of the NFA also met the legislators who continually blame the grain agency for the shrinking buffer stocks, the delay in import sales and the high prices of commercial rice.

"The NFA can only be effective in stabilizing the rice market if it has the right amount of buffer stocks Is not it ironic that we are now being blamed for a problem of tight supply and high prices for rice, that we tried our best to last year? "said Aquino.

"We are always open to critical research, those who want to verify what we have done can review our data, go through the country and ask people," he added.

The NFA administrator stressed that the current rice problem is the result of the various rejection of NFA's proposal to either increase the purchase price for palai's or to import as early as last year.

The NFA intensifies its fight against rice traders who illegally repack and divert NFA rice.

Aquino has appointed NFA National Capital Region Director Carlito Co as a point of contact person to coordinate with the National Bureau of Investigation on the conduct of the warehouse inspection nationwide.

"We need to double our efforts because it's not enough to have NFA rice available if it does not go to market and reach people, we need to make sure that NFA rice is not diverted or re-split and then by some Unscrupulous individuals as commercial rice are sold at a much higher price on the market, "said Aquino. – With Louise Maureen Simeon, Marvin Sy, Eva Visperas, Rhodina Villanueva