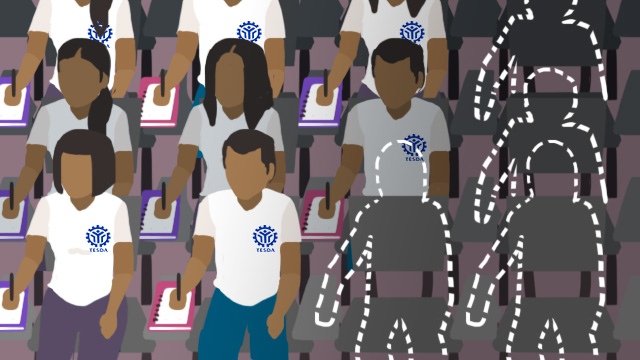 MANILA, Philippines – The Technical Education and Skills Development Authority (Tesda) has made an application of P15 million to hundreds of dubious or fictitious students & # 39; according to the Commission on Audit (COA) in its recently issued annual audit report of 2017.

State auditors said irregularities were detected between 580 people's scholarships under the P2.415-billion Training for Work Scholarship Program (TWSP). Of these, 310 were presumed to be registered at the AMAC Computer College (AMACC) campus in Manila, while 270 were presumed to be enrolled in the Technivoc Institute Corporation (TIC).

How the spirit scientists were paid: COA said that Tesda-Manila could not verify the existence of these scholars, because Tesda's only security measure consisted of appointing one "focal person" to select 5 scholars per batch and call them by telephone.

COA said that Tesda-Manila should not have paid invoices without first verifying that training was indeed taking place.

"The lack of monitoring … opened the chances for TVI's (technical-profession-oriented institutions) to submit false reports on scientists and training courses." The purpose of the TWSP is to produce skilled graduates to be productive or employable. was defeated, but instead the government's efforts and resources were wasted, "said COA.

Responding to the findings of the COA, Tesda said that it had insufficient manpower to verify scholars and training programs.

AMACC said it welcomed 310 scientists in 2015 for its "career course for software developers NC IV with JAVA."

Of the 310 students that AMACC supposedly would accept, 195 were not found because the contact details mentioned were figures that were either unreachable, incorrect, non-existent or owned by another person.

The COA was able to trace only 115 students – 77 of them were real but were enrolled on the AMACC campus in Fair View, Quezon City, and followed different courses.

The number is further broken down as follows:

"The documents that support paid payout vouchers … for the emergence of 310 scholars who claimed to have undergone the mentioned JAVA training, were considered questionable or fictitious," COA said.

Told about the findings, AMACC said it fired the school director of the school in Manila and repaid the TESDA P7.8 million in July 2017 and P1.5 million in April 2018.

TIC does not exist: TIC, which received from TESDA P1,471,500 to train 270 scientists in barista and bartending courses, probably does not exist.

In December 2017, state auditors visited the business address provided by the school on 1679 Tayuman Street, Sta Cruz, Manila. Instead, they found an establishment called "Getz Hotel."

COA said that the assumed location of the Technivoc Institute Corporation did not have:

Interviews with the hotel's security guard and receptionist also showed that they were not aware of the school and that no training programs were being carried out on the site.

COA said that these findings were evidence of the non-existence of the TIC as a training institution & # 39 ;.

In addition, the COA also questioned TIC's claim that mobile training programs were performed in Barangays 163, 2723, 312, 422 and 423 in Manila. Interviews with residents of the aforementioned barangays showed that no training was taking place.

State auditors were also unable to locate all 270 supposed students of TIC. Only 28 were found, while the remaining 242 could not be reached through numbers provided.

In the meantime, 15 of the 28 students had never even heard of the school and had followed various Tesda training programs.

Responding to the COA, refuted TIC findings and said it was in the "Getz Hotel". It also said that there was a lack of facilities because the hotel underwent a renovation at the time and claimed that the guard and receptionist interviewed by auditors were new and therefore not aware of TIC.

TIC also submitted a list of 37 students who supposedly followed the barista and bartending courses. Only 6 confirmed it. – Rappler.com