Do we celebrate local languages ​​or dialects? 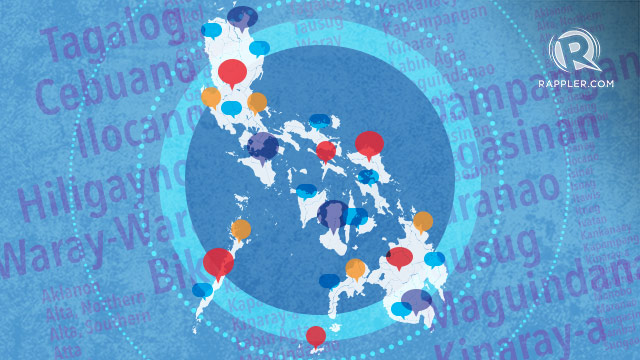 & # 39; Recognition of local identity is important, so we can all introduce ourselves to each other in this great barangay called Pilipinas & # 39;

The Philippines celebrates Buwan ng Wika (language month) in August. And every year we return to the same, never-ending debate about the distinction between a language and a dialect.

Are Cebuano, Iloko, Hiligaynon or that misnomer "Waray"(The locals would declare that they never use that word, it has always been Binisaya) languages ​​or dialects?

A generally accepted way in which linguists distinguish between language and dialect is due to the fact that the two spoken forms of verbal communication differ, despite small variations.

This is a controversy among linguists, who point out that there are languages ​​in Europe and Africa that are mutually intelligible, but absolutely different languages. But I will leave that debate to the linguists to solve.

However, I do not doubt how the conditions here in the Philippines have historically been applied.

So here is the trigger: I recently encountered an online exchange on #BuwanNgWika under a message from the Philippine embassy in London.

It lists some of the national languages ​​and emphasizes that these are "languages", which means a comparison with "dialect". I appreciated this effort to inform the public informally, or at least to foster a substantive discourse.

In one of the discussions, a person explained how to recognize the local languages, while the other thought that the post unnecessarily inspired political undertones in a discussion about language and stressed that there was no real conflict.

No conflict? My knee jerk reaction was irritation.

I felt fired like Bisaya. Do people really expect us to forget our negative experiences, hold each others' hand and sing Kumbaya with them around a bonfire?

The function was typical of someone who came from the oppressive party: when differences arise, the unit card is shared, making the existence of a problem to which they have largely contributed invalid.

To quote a friend: "Even the declaration of truth and recognition of people becomes reprehensible to them because marginalization has been the norm for so long."

Let us not deny that there has been – and still is – a problem with the way people have "language" and "dialect" in common. However we talk about the technical aspects of these words, we often encounter the rather humiliating ones "LONG"after describing for example Cebuano as a dialect.

Before anyone says "Huwag mo namang kaming nilalahat (Do not generalize), "just let me say that we are aware of this.Of course, not everyone in Manila is too insensitive or unconnected to come after people from areas outside of NCR.I can not fully say that there is an absolute lack healthy cultural exchange exists.

Nothing will happen quickly at any time if some of us insist that there is no problem.

The microagrogressies and the spot where we are exposed to individuals, to education and in the regular media alone are more than enough to talk about buckets of beer all night – how could they say that conflict and power play do not exist ? ?

Do not get me out of the way "Magtagalog ka nga (Just speak Tagalog)! "Or this essay can continue as long as the Duterte press conference at the airport. (You know, those where he should talk about foreign relations, but talk about drugs, drug drugs.)

Anyway, I finally calmed my tits and realized that it is not so much a personal attack on us as a systemic issue.

After all, if someone has grown up in an environment where someone has not been denied their local culture and mother tongue, someone's next patriotic step may be to identify with the nation.

It is different for generations of non-Manila children who had to pay a few pesos for every word they said in class. The effects are far-reaching, as was the case in Cebu and other Cebuano-speaking areas.

It took more than ten years for local artists to encourage love for the language of Cebuano.

Prior to this, Cebuanos also found local work Bastos (coarse) or Baduy (in bad taste). Literature written in a language that we use every day was considered an old school, "Panahon pa ni Mam Por. "Local radio stations refused to play music written in Cebuano until social media proved that our language is acceptable in modern art.

Until then, the nation was stuck Matud Nila and Manok ni San Pedro in relation to Cebuano art.

Although these works remain important to us, the constant and limited association with obsolete work can be eye-roll inducing. If you can not find yourself, imagine a stranger after a foreigner only tells you "Pacquiao" every time he discovers that you are Filipino.

I am not sure whether current practices have been updated, but the efforts of educational institutions – especially elementary and middle school – were not as proactive as those of the creative sector.

Growing up, Buwan Ng Wika performances were made up of Florante with Laura, Balagtasan and Tagalog rate. Schools continue to teach Filipino and use English for the rest of the other subjects, where Cebuano is banned or a child is told that he is misbehaving.

Personally, I find nothing wrong with including Filipino in the curriculum for children, but they seem to continue to teach it the wrong way and it still has the same counterproductive effects.

It is therefore understandable that in a time when there is more struggle for recognition, this subject attracts a lot of guts.

It is not only proud of the birthplace. It is systemic oppression that affects the appreciation of an entire people against their own culture, as well as their introspective processes as a community. It prevents us from knowing who we are.

With that being said, I agree that it may be healthier to take linguistic or geographical jargon as just that jargon. But that's only one side of the coin.

The downside is proven by our experiences that have shown that the word "dialect" (or even "probinsya") Bears a heavy connotation of inferiority when it is usually used in the capital to describe other mother tongues." To acknowledge the problem and jump directly to the group, singing is a negative decision, that is: "It's all in your head, people! "

It certainly is not.

There are similarities between the regions that we celebrate. And there are differences, which we should also celebrate rather than taking it as a threat to Philippine identity.

Recognition of the local identity is important, so we can all introduce ourselves well to each other in this great barangay called Pilipinas. Regionalism is not so bad when you think about it – when we begin to see our identity as a collection of regional cultures.

We did not get the same extensive opportunities to explore our own culture and language as the capital.

You are not the only one in this country. Remember that it is quite a job to ignore the experiences of other people and expects to undoubtedly carry Kumbaya with you in a homogeneous existence – that is a bit too dictatorial, do not you think? Look around: you have neighbors, yo.

Chai Fonacier is an actor, musician and writer from Cebu City.