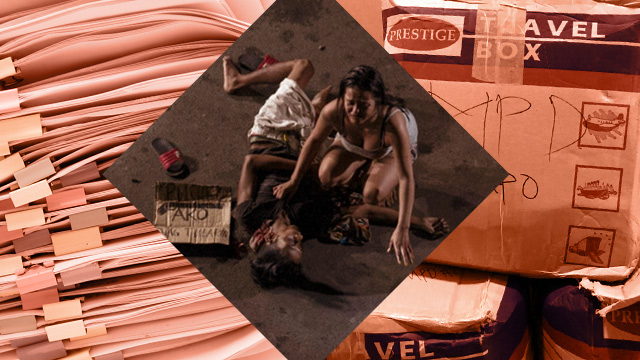 DRUG WARWORKS. The number of drug cases filed in court is rising from 2009 and will become the highest crime for public prosecutors in 2017. Picture of Noel Celis / AFP and Rambo Talabong / Rappler

MANILA, Philippines – Drugs have taken over Philippine courts over the past 9 years, data from the Ministry of Justice (DOJ) and the Supreme Court show.

According to data from the National Public Prosecutor's Office (NPS) under the DOJ, the number of drug cases filed by prosecutors in court has increased from 2009 to 2017.

As can be seen in the graph below, in 2009 only 7,675 drug-related cases were filed in court, far behind the cases for estafa, theft and bouncing checks.

But in the course of the following years, drug cases took other crimes so drastically that they increased to 70,706 cases in 2017, with bouncing checks going a long way to 21,760.

But the success rate of prosecution for drug cases remains one of the lowest, according to the NPS data for 2016 and 2017, the only data is publicly available. (READ: 19 cases of drug death killed in court – DOJ)

Courts also reject thousands of drugs cases, which is a matter of concern for Minister of Justice, Menardo Guevarra.

Although the percentage is relatively low, Guevarra is concerned that the government may lose business due to inadequate handling.

"Often, the main reason for dismissal is technical: non-compliance with procedural requirements, particularly as regards the chain of seizure of seized drugs," said Guevarra.

Faced with this question during the judicial and judicial administration (JBC) interview for Chief Justice, Associated Justice Diosdado Peralta said that the hands of the court are bound because following drug procedures is the duty of the executive.

"What we should do is have a summit with prosecutors, judges and those involved in drug law enforcement, and we need to come to an agreement [on] what has to be done. The laws are already there, "Peralta said.

For the big picture, data from the Supreme Court in the Jury-year Justice Judge (JAR) show that the lower courts had collected 289,295 drug-related cases over time.

A big problem is that the courts simply can not keep up, so much so that Peralta said: "We're failing in drug cases."

In the context of the Dangerous Drugs Act, the trial of a drug-related case must be completed no later than 60 days after the submission of the information.

"It is humanly impossible to terminate a criminal case if you start counting the period after submitting information," Peralta said.

Peralta explained that when judges schedule the scheduled data when respondents are addressed, they eventually plan "6-7 cases" for hearing on the same day, when "they can only hear three cases on the same day".

Ousted Chief Justice Maria Lourdes Sereno has assigned hundreds of additional drug courts in 2016 when the campaign against drugs was launched.

Peralta suggested that there should be a review of the ongoing pilot rules in drug-related cases to address the problem, as well as more training from judges on how to tackle dilatory pleadings. – Rappler.com