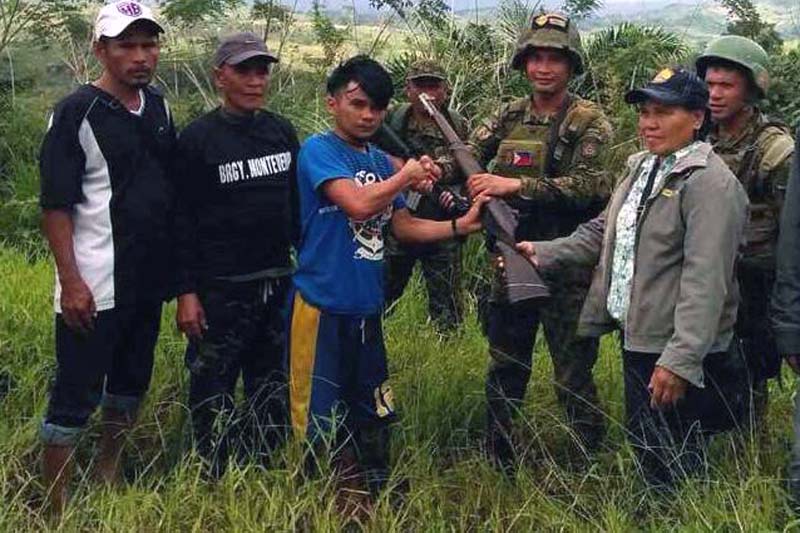 MANILA, PHILIPPINES – The fate of the peace talks between the government and the Communists remains uncertain, as President Rodrigo Duterte has threatened to "raise the bar" in the fight and no longer accept overconfidence.

Duterte denounced the New People & # 39; s Army and communist party founder Jose Maria Sison for threatening him, saying that they do not have enough powers to defeat government troops.

"The NPAs are arrogant, these fools have even threatened me." Sison claimed I was comatose, foolish, they do not have a navy, an army, a helicopter, CAFGU (militia) and air force, but they talk like they're someone. Do not believe them, they are only capable of ambushing, "the president told Saturday to troops in Sulu.

The New People's Army fought a guerrilla war since 1969 as a recognition of the lack of personnel and firepower to involve government forces in conventional warfare.

(There will come a time, there will be no more traditions, son of a b ****. Fight until you die. We no longer accept traditions. You keep coming back.

CLIP from the government

The government has a surrender and reintegration program called the Comprehensive Local Integration Program and with which former rebels receive financial assistance to help them re-enter the regular society.

These traditions, based on reports from the past, are made after negotiations and not on the battlefield.

In March, Defense Minister Delfin Lorenzana claimed that more than 4,000 Communists had already surrendered in the first quarter of 2018.

The Communist Party of the Philippines abolished the presumed withdrawal symptoms and said in response that the assumed rebels who had given up the battle for the Philippines forces were more than the strength of the CPP-NPA.

"So," Congratulations! "Are good for Lorenzana and Duterte, because by June they would have defeated the NPA at least twice," the CPP said.

Sison claimed that Duterte was in a coma last week, but the president denied this and claimed that the communist leader has cancer. Duterte had also called Sison a discredited leader and a freeloader who does not pay his hospital bills in the Netherlands.

Duterte has promised to cooperate with the communist rebels who have been fighting armed struggle against the government for 50 years. But disagreements between the two parties have hindered the progress of the negotiations.

The President canceled the formal talks scheduled for June to personally review the agreements signed by his predecessors and communists.

Last month, Duterte said he had read the rebel's proposals and claimed that it would lead to a coalition government, an arrangement for sharing power that he believes is not allowed by the constitution.

The government and communists also have differences regarding the location of the talks.

Duterte wants the negotiations to be held in the Philippines, but the National Democratic Front (NDF), the negotiating panel of communists, said that ut should happen in a neutral area.

The two parties also made accusations and blamed each other for the problems that delay the discussions.

The Defense Department had accused the Communists of coming up with a three-year plan to drive out Duterte, but the NDF rejected it as a "orchestrated"; lie.

Last month Duterte said he did not close the possibility that the negotiations between the government and the Communists could only resume after he had left office.

"The Communists – we will eventually talk in whatever way you want, but we'll have it in a matter of time, but I'm pretty tough," the president said in a speech in Zamboanga Sibugay last July 26th. – Alexis Romero