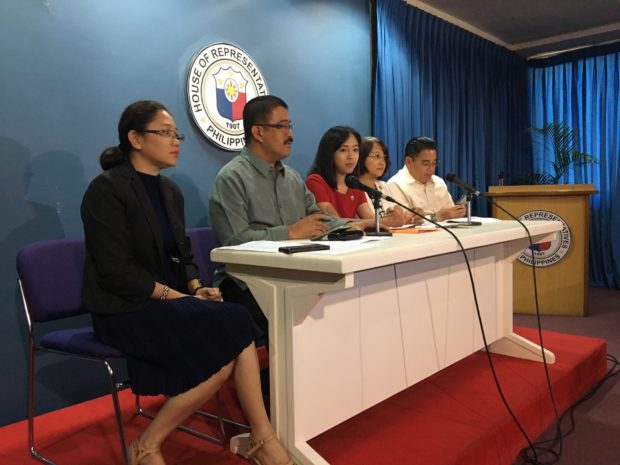 Legislators from the Makabayan block of the House of Representatives on Wednesday denounced the clash of "pig barrels" between the camps of President Rodrigo Duterte and Speaker Gloria Macapagal-Arroyo in the downstairs room.

The planned plenary debates for the proposed P3,757 trillion national budget for 2019 were stalled for two days after lawmakers complained about the alleged P55 billion "insertion" in the budget of some representatives.

The plenary debates only took place on Wednesday one day after housemagnal leader Rolando Andaya, Jr. a committee of the complete and amended House Act No. 8169 that was approved by the credit panel chaired by Rep. Karlo Nograles.

But the Makabayan congressmen said that even if the P51.8 billion was re-aligned last night, "more than P31 billion as lump sums continues to exist at the Ministry of Public Works and Highways (DPWH) and is still pork."

"The clash about generosity is a classic example of bureaucrat capitalism, where people's hard-earned funds are fought and shared by politicians," they emphasized.

The national budget, she added, should be used for the direct benefit of the Filipino people and "not for campaign money for the upcoming elections nor to further fatten the pockets of politicians".

Senators have vowed to look at the 2019 budget, some of whom said it was pierced with petit funds from lawmakers.

"Pork barrel" or the Priority Development Assistance Fund (PDAF) are flat-rate discretionary funds from legislators. This was declared unconstitutional by the Supreme Court in 2013.

Several members of the House have denied that the controversial fund was pork.