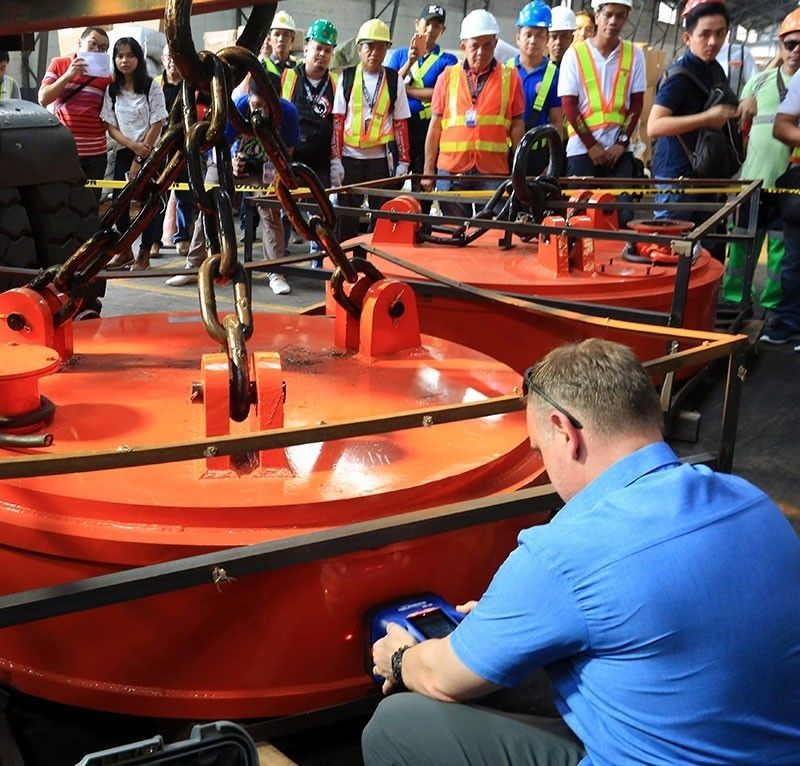 MANILA, Philippines – The Philippine Drug Enforcement Agency (PDEA) remains committed to tracking what has happened to an estimated P6.8 billion smuggled shabu that has reportedly made its way into the streets.

"We still can not say (the case is) already closed," PDEA spokesperson Derrick Arnold Carreon told "The Chiefs" on Cignal TV's One News on Monday.

PDEA Director-General Aaron Aquino said that a ton of shabu has slipped past the Bureau of Customs (BOC) after the recovery of several magnetic lifters at a warehouse in General Mariano Alvarez, Cavite on 10 August. He noted that the lifters were similar for those who smuggled $ 4.3 billion in sjabu on 7 August in the port of Manila.

Carreon said that they work on leads obtained not only from the August 7 operation, but also from other sources.

"Without wanting to harm the research, meron naman po kaming pinanghahawakan (we have something to hold on to)," he said.

The PDEA and the BOC are in constant coordination on the issue, according to Carreon, who claimed that the two offices have "moved" from their argument over the disputed mission.

Carreon mentioned last week the confiscation of P24 million ecstasy from France at the international airport Ninoy Aquino as proof of their partnership.

"The fact after nakuha na naman kaming (that we were again able to grab a) shipment after malaki-laki (which is relatively large) shows after naka-move on after tayo (that we have already gone further). We work together, and we show the public after us that instead of feeling our dissatisfaction with each other, we work together, "he said during the interview.

President Duterte had previously branded as pure speculation about PDEA's claim that the P6.8 billion of shabu were smuggled into the country.

Meanwhile, Carreon trivialized the absence of Aquino since the last controversial statements made.

He twisted insinuations that Aquino, currently in the United States, is on his way as a PDEA chief.

"He (Aquino) has not resigned, he just enjoys his vacation and he is still, in all respects, our PDEA Director General," said Carreon of Aquino.

Aquino, according to Carreon, remains "for all purposes" the head of the PDEA.

The BOC welcomed yesterday the National Bureau of Investigation (NBI) investigation into the four magnetic lifters reportedly used to hide about one tonne of shabu that reportedly slipped past the Manila International Container Port (MICP).

BOC spokesman Erastus Sandino Austria said they would cooperate with the probe that they hope to discover the truth about whether a large amount of illegal drugs could have left the MICP unnoticed last July 14 at 9:44 am.

"We are happy with any research that will eventually bring to light all issues related to this issue," said Austria, who is also the district collector of the port of Manila.

He gave the assurance that the BOC, under the customs authority Isidro Lapeña, would not tolerate scalawags in the agency.

"We have consistently said that we are the first to clean up our ranks, if our own people colluded with a drug syndicate or were negligent or negligent in their duties, they will be dealt with quickly and thoroughly," said Austria.

"We have a strong and solid reform agenda and the agency has made great progress in this respect," he added.

The NBI will conduct a parallel investigation into the controversy, even if Duterte already refers to Aquino's accusations as 'pure speculation'. had been labeled.

During the July 14th committee of the House of Representatives on the hearing of dangerous drugs about the alleged shabu shipment found in Cavite, the BOC announced that no trace of illegal drugs could be found in the four magnetic lifters found in a warehouse in General Mariano Alvarez in Cavite.

"The claim that one tonne of shabu is circulating in the market is not based on the results of laboratory analyzes both from the PDEA and the Philippine national police region. 4. The magnetic lifters do not have dangerous drugs," Lapeña said at the hearing, which was chaired by Surigao del Norte Rep. Robert Ace Barbers.

One of the accused in the case of illegal drug imports about the P6.4 billion shabu shipment from China was denied the bail of the regional court in Manila (RTC).

Eirene Mae Tatad, owner of EMT Trading, who was the addressee of the shabu mission, was denied bail by Manila RTC Branch 46, acting Judge Rainelda Estacio-Montesa.

The judge denied Tatad's bail for lack of merit because she asked the court to determine her bail without first following the bail-in procedure.

Tatad had argued in her bail that she had no knowledge of the shipment of the 602 kilo shabu that passed the BOC last year and eventually ended up in a warehouse in Valenzuela City.

"The court finds it too early for Tatad to ask the court to determine its bail because there is no determination made by the court about whether the evidence of debt is strong or not", the judge ruled.

However, the court has not yet found a solution to the bail of self-imposed customs fighter Mark Taguba, who was detained at the prison in Manila at Tatad.

Meanwhile, the Chinese businessmen involved in the shipment – including Richard Tan, who owns Hongfei Logistics where the warehouse was rented – have generally remained since the arrest warrants were issued against them.

They were also charged with delivering and transporting medicines for the Valenzuela RTC, which later rejected the case for forum shopping. – With Evelyn Macairan, Marc Jayson Cayabyab