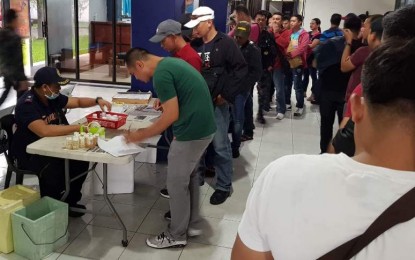 BACOLOD City – About 200 anti-drug workers from the provincial office of the Negros Occidental Police (Nocppo) had undergone a drug test.

Those of San Carlos City, Escalante City, Calatrava, Toboso and Salvador Benedicto have not done the Friday drug test. They've already done it two weeks ago.

Police officers were made to submit urine samples, Cordua added. The results will be released this week.

According to Cordua, the anti-drug workers attended a seminar on the procedures for filing drug cases at the headquarters in Nocppo, when they were informed that a drugs test will take place.

Castil said it was part of the internal purge campaign of the Philippine national police (PNP).

In mid-August the PNP reported that at least 400 members of various law enforcement agencies in the country had been dismissed for drugs.

PNP spokesperson Senior Superintendent Benigno Durana Jr. said 267 staff were made redundant for drug use, while 95 others were dismissed for drug-related offenses. (With a report from PNA/PN)