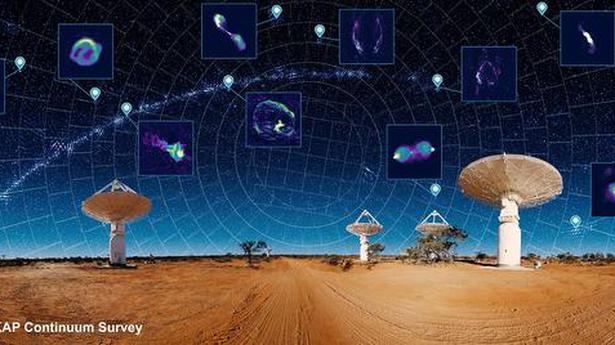 What makes this telescope unique is its wide field of view, which allows it to take panoramic photos of the sky with sharper details than before.

(Subscribe to Science For All, our weekly newsletter, where we try to take the jargon out of science and put the fun into it. Click here.)

A powerful new telescope in inland Australia has mapped vast areas of the universe in record time, unveiled a million new galaxies and paved the way for new discoveries, the country’s national science agency said Tuesday.

The radio telescope, called the Australian Square Kilometer Array Pathfinder (ASKAP), was able to map approximately three million galaxies in just 300 hours. Comparable surveys of the sky have taken as long as 10 years.

What makes this telescope unique is its wide field of view, using receivers designed by CSIRO, which allows it to take panoramic photos of the sky with sharper details than before. The telescope only needed to combine 903 images to map the sky, compared to other radio surveys of the entire sky that require tens of thousands of images.

“It’s more sensitive than previous studies that covered the entire sky in this way, so we’re seeing more objects than in the past,” McConnell said. Reuters.

With a telescope that can examine the sky in a few weeks or months, the process can repeat itself over and over in a relatively short period of time, allowing astronomers to see and track changes systematically.

“Even with this first pass we have now, compared to previous images, we have already found some unusual objects,” said McConnell, including some unusual stars undergoing violent eruptions.

He said the data collected in this study would enable astronomers to learn more about star formation and how galaxies and black holes evolve through statistical analysis.

The first results were published in the Publications of the Astronomical Society of Australia.