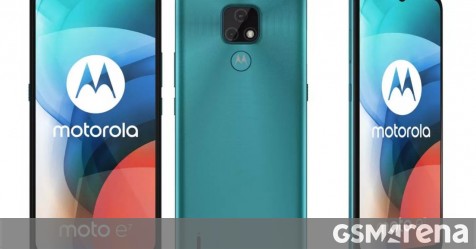 Motorola is definitely taking its time to market the E7, considering how long it has been leaking – and the fact that its relative, the E7 Plus, has been official since September. Today we get a new exposition of the Moto E7, which is the star of two separate sets of official-looking printing presses, showing it in two color versions.

The renderings also include some of the alleged specifications of the E7. The phone is said to come with a 6.5-inch HD + display, a 48MP main rear camera supported by a 2MP depth sensor, a 5MP selfie snapper buried in that notch on the front and a 4000 mAh battery. The Moto E7 runs Android 10 on day one, which is a bit disappointing in this day and age, but quite understandable for an entry-level model like this.

We still don’t know when the E7 will finally go official, but hopefully it will be sooner than later. Expect it to be cheaper than the already fairly affordable Plus.