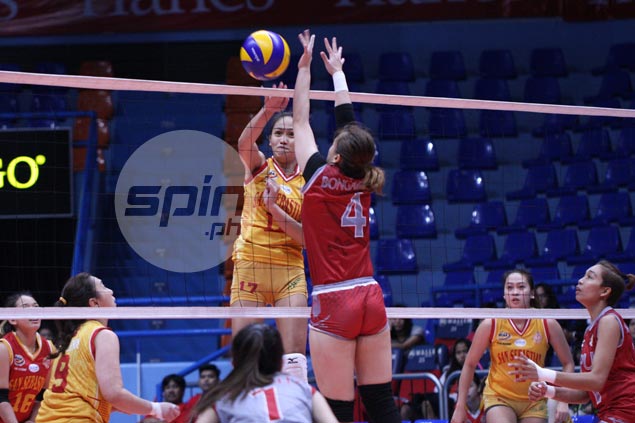 SAN Sebastian College avoided a meltdown against Lyceum from the Philippines University, scored a 25-12, 25-21, 17-25, 22-25, 15-9 victory to start the NCAA Season 94 women's volleyball campaign on a winning letter at Monday at the Arena in San Juan City.

SSC slipped after taking a lead of two sets, allowing the Lady Pirates to make a decision before the team assisted by Roger Gorayeb recovered, with Nikka Dalisay, Shannai Requierme and Joyce Sta. Rita is leading the way.

Dalisay redeemed 21 points, built on 18 kills, two service aces and a block and made 13 excavations when San Sebastian completed the win within one hour and 56 minutes.

Mariel Larioque had 10 spikes and finished with 12 points for Lady Knights.

SSC-R plays Mapua on Friday at 12 o'clock, while the Letran fight at the University of St. Benilde at two o'clock.

Jaylene May had 13 points to lead the Lady Generals, while Mecca Magsino and Kenneth Deanne Reyes added eight hits.

The Lady Generals take everlasting help (0-1) on Thursday at 12 o'clock, while the Lyceum Lady Pirates also tries to bounce back on the same day at Jose Rizal University (0-1) at 2 o'clock in the morning. in the morning.