12 chosen for the Disciplinarity of the SN, 6 are subordinates of Ziobro 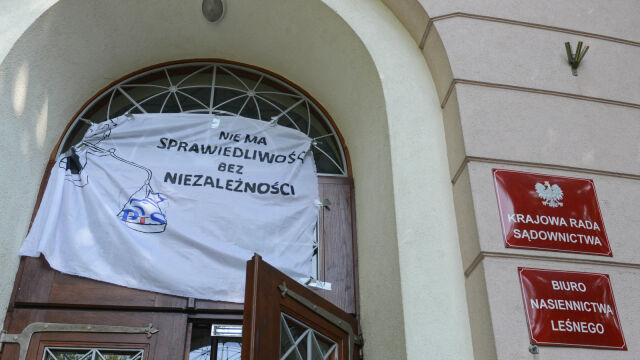 And for the Disciplinary and other functions in the Supreme Court, the & # 39; big & # 39; candidates, as you can hear in the National Court Register.

– They present a huge class – says Judge Teresa Kurcyusz-Furmanik, a member of the national judicial register. – These were really good candidates – adds her colleague to the KRS Jarosław Dudzicz, judge of the court in Gorzów Wielkopolski.

This is not what the associations of judges see differently. – Everything that happens there is absurd – says judge Monika Frąckowiak of the Association of Polish Judges "Iustitia".

From a list of twelve persons with a positive evaluation by the national court register to the disciplinary chamber of the Supreme Court, half are prosecutors of various prosecutors, different levels – subordinates of Minister Ziobro.

– The disciplinary chamber acts according to a political order – says Kamila Gasiuk-Pihowicz, a representative of Nowoczesna. – Please remember that this will be the House that will influence other judges, because she will accuse other judges – adds Robert Kropiwnicki, PO deputy.

In the National Council for the Judiciary, this kind of accusations is revived with a shrug of the shoulders. – I see no reason to explain my decision – says Leszek Mazur, chairman of the national court register. – I do not wonder who has been elected – says judge Wiesław Johann, representative of the president in the national court.

Among the selected prosecutors is Małgorzata Bednarek, founder of the Ad Vocem Association, which brings together close staff of the minister. There is also prosecutor Jarosław Duś, who testified to the parliamentary inquiry committee after the first PiS rule, he complained about dilapidated memories arising from hitting the head after he fell out of the chair. Then he was retired. After the elections won by the PiS, he returned to the prosecutor's office.

– Prosecutors are the ones who guarantee a high quality of disciplinary procedures – argues Stanisław Piotrowicz, chairman of the parliamentary committee for justice and human rights.

The question is whether this quality is also guaranteed by a person who himself has a disciplinary matter. – Violation of the ethics principles of a lawyer regarding participation in private debt collection activities at the debtor's home – informs Andrzej Kaliński, dean of the District Chamber of Legal Advisers in Białystok. I am talking about legal advisor Małgorzata Ułaszonek-Kubacka, who cooperated with Zbigniew Ziobro in one of the lawsuits. She does not want to talk alone.

Without support for the judges

Under the address of Adam Tomczyński's advisory firm, another candidate, we learn that interviews do not offer what is new. Because Tomczyński has spoken a lot in public so far, in which he has called on President Gersdorf to retire and to stop pretending that he has some function & # 39 ;. He regretted that "the rulers are accused of violating the rule of law, but it is exactly the opposite." On the internet he praised Prime Minister Morawiecki and supported Patryk Jakiego.

One of the positively recommended candidates is also an employee of Sejm speaker Marek Kuchciński Jan Majchrowski, who supported him in the dispute over the Constitutional Tribunal and questioned the opinion of the Venice Commission.

The next two candidates are judges Konrad Wytrykowski and Piotr Niedzielak – chairmen of the appeal bodies in Wrocław and Bialystok, appointed by Zbigniew Ziobro.

Many judges from the judges were rejected, although their great achievements were emphasized. They have not received the required number of votes.