A week in the campaign. Accusation of password theft and election exhibition 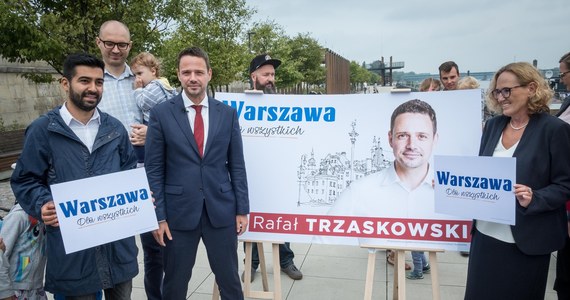 Allegations of stealing the election slogan, a grip known for Andrzej Duda's campaign and surprising candidates: a transgender activist in Krakow and close to politicians. Behind us is the third week of the local government campaign. 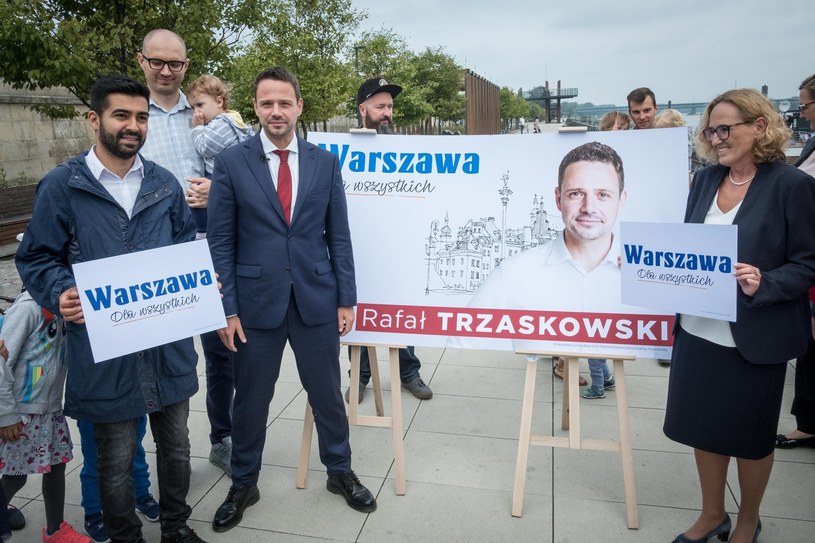 Trzaskowski has announced that his campaign will be carried out under the slogan "Warsaw, for everyone."
/Jacek Domiński /news reporter

At the beginning of the week, Deputy Prime Minister Jarosław Gowin said in an interview with the weekly "Do Rzeczy" that the Polish government could ignore the ruling of the European Court of Justice on questions from judges of the Supreme Court.

Rafin Trzaskowski, the candidate for the President of Warsaw of the Citizens' Coalition, immediately referred to the words of Gowin.

The PO politician, at a conference in the Sejm, asked the PiS government "is this the position of the government?"

"If that is the case, it means that the PiS government says treaties and prepares to leave the EU." I wanted to remind you that 40% of investment in Warsaw is financed from the EU budget. If PiS will lead us out of the EU, cities like Warsaw will continue to fund from the EU budget "- Trzaskowski argued.

PO does not hide the fact that the questions about the place and future of Poland in the EU will be strongly exposed in the campaign of the local government party.

On Friday, Trzaskowski announced in his turn that his campaign would run under the slogan "Warsaw for everyone".

"We want to equate the opportunities for Warsaw for everyone – regardless of whether someone lives in Ursynów or Wilanów, whether he lives in the Praga Północ or Targówek – he should have exactly the same opportunities, which is why we are talking about one program for the whole of Warsaw. and we also talk about 18 district programs & # 39; s "- he explained.

The password evoked emotions, but it was not the platform that counted on it. Piotr Guział, also for the seat of the president of the capital, accused Trzaskowski of the theft.

"Unfortunately, Mr. Trzaskowski stole my election slogan! As you can see in the screenshot, I published this slogan on my profile yesterday on fb!" I have already ordered an outdoor campaign! " Warsaw for everyone ", but not for the cheaters party" – he shouted Guział on Twitter.

Ladies and gentlemen! Unfortunately, Mr. @trzaskowski_ my election slogan! As you can see in the screenshot, I published the password on my profile on fb! I have already ordered an outdoor campaign! "Warsaw for everyone", but not for # PartiaOszustów pic.twitter.com/CwT1HSusmm
– Piotr Guział (@PiotrGuzial)
August 31, 2018

The deputy head of Trzaskowski's staff, Aleksander Gajewska, commented that Guział "exaggerates" and the PO and Modern "talk for many weeks about open Warsaw, modern Warsaw, Warsaw for everyone".

The slogans of Trzaskowski were also supported by PO Cezary Tomczyk who supported him in the campaign. "Mr. Councilman, you probably have not approached the slogan seriously, because under the domain of warszawadlawszystkich.pl (Trzaskowski & # 39; s website – ed.) There is something else … And in the campaign we have repeated to this values, let Warsaw connect everyone! "- he wrote.

The case caused a heated discussion on social media.

Patryk Jaki also took the floor. The candidate from United Right has called Trzaskowski a "man of plagiarism".

Meanwhile, Jaki concentrated on the subject of the development of the metro last week. In the center of Warsaw he opened "Jaki Cafe", an information point in this case and a place where he has to meet the inhabitants of the capital.

On Saturday, Jaki also opened an exhibition about the promises of the extension of the metro that PO did not know.

The images of President Hanna Gronkiewicz-Waltz and Rafał Trzaskowski and their promises about the metro have been posted on various signs since 2006, which have fallen into election campaigns since 2006. They were interspersed with critical advice from Metro Warszawskie, with budget entries and the words of the vice-president of the capital and spokesman the town hall.

PO promised 38 new metro stations in 2006 in 2 terms. Three terms have passed and we have … 12 (!) And @trzaskowski_ promises … what in 2006. Enough of these lies! They did not keep their word then and now they change their minds about the meter every week. # PromisesRafałaiHanki #Jaki2018 pic.twitter.com/2DSoggURkp
– Patryk Jaki (@PatrykJaki)
August 30, 2018

He announced that in the weeks that followed he would prepare some exhibitions on "credibility in politics" and "credibility of PO governments".

The patent at the exhibition is proven grip, known from the presidential campaign of Andrzej Duda in 2015.

Well-known hip hop fans Wujek Samo Zło joined the team of city activist Jan Śpiewak. Maciej Gnatowski would like to become a board member in the Wola district in Warsaw.

"Uncle Sam Evil has been working for the youth and our city for a long time and is fighting against afterburners." Hip-hop does not connect and distribute. We want Warsaw to be like that! "- he wrote on Twitter the candidate of the" Win Warsaw "committee.

Marek Jakubiak calls on behalf of Kukiz & # 39; 15 the chairman of the mayor of Warsaw, and apparently his life partner does not want to be worse. Irmina Ochenkowska announced that she would flee to the regional council of Mazovia.

This is not the first time that a woman enters the footsteps of a well-known husband. President Iwona Mularczyk, wife of parliamentarian Arkadiusz Mularczyk (law and justice), applied for President of Nowy Sącz.

Anna Morawiecka was also jealous of her political career. The Prime Minister's sister begins with the support of the PiS for the mayor of Oborniki Śląskie.

In Krakow the incumbent president Jacek Majchrowski and the PiS candidate, Małgorzata Wassermann, are currently conducting a peaceful campaign. The last polls show that the game will be very good.

It is controversial in the margin of the race for the presidency at Wawel. Vala T. Foltyn, a transgender activist representing Volna Autonomy from Lance and Avant-garde, joined the election campaign.

The name of the committee sounds like that of ASZ Dziennik, but it is real and registered in PKW.

Vala T. Foltyn introduces himself as "a happy single, sister, son, daughter, friend, buddy, lover of the world and space".

She says she is a "teacher dance practices, curator, artist, reporter of non-governmental organizations engaged in cultural heritage, feminism, gentrification, LGBTQIA + and social and environmental activism."

On the other hand, Krakow Restaurateurs will compete for places in the city council, dissatisfied with how the current city authorities treat entrepreneurs.

The head of the automobile club in Chełm Grzegorz Gorczyca & # 39; promised & # 39; inhabitants thousand zloty per week for each child, free taxi & # 39; s and metroconstruction.

The internet hit yesterday – "candidate" Grzegorz Gorczyca of Chełm, but this time in full version, with page 9. As if a vlogger from Szczecin said – I ask for strong RT. pic.twitter.com/MSndQDZKpv
– Maciej Lewacki (@Maciej_Lewacki)
August 29, 2018

The photo of Gorczyca with the promised write-offs appeared in the new week of Chełmski and quickly captured the internet.

It soon became apparent that these were no real promises and a real candidate only for the company Gorczycy.

The local elections take place on 21 October. The possible second election round is scheduled for November 4.

"Week in the campaign" is a summary of the most important and interesting events of the week of the local government campaign that is published every Sunday by Interia.