After a tragic accident in Przemyśl, the driver of a Ukrainian coach was arrested for three months – Car and car & # 39; s 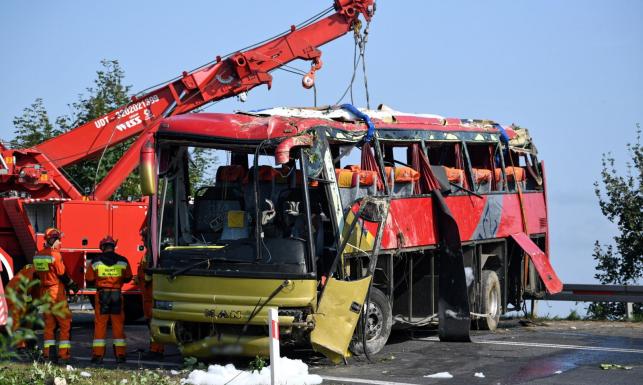 The district prosecutor's office in Przemyśl, who was in charge of investigating the accident, asked for arrest for the driver.

Bus driver Mykola Ł. Was interrogated Sunday in the office of the public prosecutor he heard the accusation of deliberately bringing a disaster into traffic, so that three people died and many were seriously injured. The man did not plead guilty to the act with which he had been accused and made a statement. He is faced with up to 12 years in prison.

Information on the application of the arrest of the suspect was forwarded on Sunday evening by the prosecutor of the King in Przemyśl, public prosecutor Beata Starzecka-Skrzypiec. She added that the accused, before the court, as well as in the prosecution, alleged that the accident had occurred because the brakes had broken.

The order of detention fell on Sunday evening after an hour of invisible hearing. The decision is enforceable, that is to say the suspect immediately arrives in custody but is not legally binding, which means that the parties can file a complaint.

As Starzecka-Skrzypiec, prosecutor said earlier, during the interrogation in the prosecutor's office, the suspect admitted that the road was difficult, the surface slippery, there was fog. He said that the itinerary and the crossing of the Polish-Ukrainian border by the passage in Krościenko had been set up by a travel agency – an organizer of the trip, and he did not know this route and was guided by navigation.

He claimed that, since he saw the sign that was winding on the road, he was traveling at a speed of 50-60 km per hour, while the sign with a speed limit of 30 km did not notice it; he had previously seen a mark with a limit of 50 km / h. He claimed he was trying to brake at the critical moment, but the brakes failed.

However, according to an expert in the field of road traffic the driver drove at a speed of 75 km / h with a limit of 30 km / h at the scene of the accident.

Mykola £. Has been a pilot for 10 years, he has been working as a driver for coaches for about 6 years and since January this year. runs on international routes, including Austria, Italy, Germany and the Czech Republic. The coach had a substitute, but – as the prosecutor said – completely from leaving Lviv – from about 3.30 pm on Friday of Polish time (4.30 pm Ukrainian) – he ran alone. He was sober. The coach traveled from Lviv to Vienna. Passengers are people aged 8-55.

The accident took place Friday on route no. 28 between Przemyśl and Sanok a few minutes later 22. The carriage, which was carried by 54 people, pierced the energy-hungry barrier on the sharp bend, pulled off the lane and rolled off a high, grassy steep slope, which tumbled several times.

Three people died in the accidentwho were under the inverted coach. 51 passengers were transported to hospitals in the region, including nine seriously injured, as well as those who did not complain about injuries. The fatalities are two women aged 30 and around 50 and a 31-year-old man.

On Sunday there were still more than 30 participants in the accident in the hospitals in the region. Nine people returned to Ukraine after the hearing. However, a few stays in one of the hotels in Przemyśl. They have both psychological help and a meal. The consul of Ukraine is on the spot.

Demolished bus was raised on Saturday with the help of a crane and transported to the parking garage. It is available for the police and the public prosecutor's office.