Andrzej Duda: our concern is that a Polish farmer can work quietly 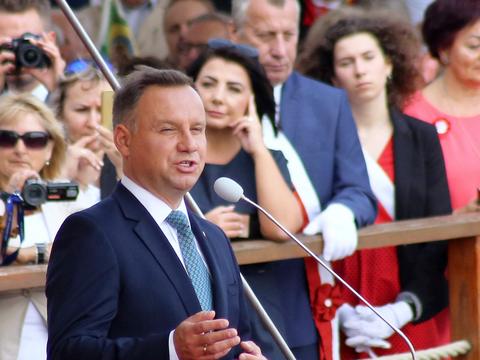 In his speech before the Holy Mass, led by the Metropolitan of Krakow, Archbishop. Marek Jędraszewski, Duda not only thanked the residents of the village for their daily work and crops this year, but also – in the year of the 100th anniversary of Polish independence – for their major contribution to the restoration, construction and defense. He assured farmers of the constant care of the government and the president for the village and its inhabitants.

– I want to assure you that the President of the Republic, together with the Minister of Agriculture, has your business in mind every day, that it is our great concern that the Polish farmer can work in the best way possible to get the best results to achieve and that his family could not only live with dignity, but especially at the highest level – said Andrzej Duda to about 60 thousand. the inhabitants of the village gathered on the Jasna Góra plain.

He assured that the government also strives to ensure that the same cultural goods, communication, education and other forms of development are available in cities and suburbs in rural areas.

– This is an extremely important element of what I emphasize with such strong strength: I want sustainable development for Poland. Sustainable development means that the Polish countryside is at least as well treated as the city, and because it has been treated worse for years and therefore needs more care today – and I am sure – said the president. As he noted, the Polish village struggles with difficulties all the time.

– In particular, the work on land for itself means that it also depends on the vagaries of nature, of the weather. Also this year, this season, we are struggling with drought; she touched many farmers. Perhaps more than expected, he touched us – especially with his reach – African swine fever and many other problems that Polish agriculture is facing today, Duda said.

He recalled that the share of agricultural products in Polish exports has increased threefold in recent years – currently it is one third of all Polish exports. The president assured that efforts are being made to open up new markets for Polish farmers, particularly in the Far East, where there is great potential for consumption.

Andrzej Duda stressed the great role of Polish peasants in regaining and building Polish independence – from the legionary struggle in 1918, through the Polish-Bolshevik war in 1920, the defense of Poland in 1939 and the war-defensive movement, to the struggle of the invading soldiers and participation in Urszula Solidarności in 1980. As he said, thanks to this today, we can enjoy freedom in every sense of the word.

– In the first place, I aim for freedom in this way, in accordance with our tradition, so strongly grafted into our hearts – said the president, emphasizing that "it was mainly Polish farmers who were the ones who, for a very long time, often for this freedom they made shed blood for her. "

Andrzej Duda recalled that during the First World War Polish peasants revived the legendary Polish army and in 1920 together founded the "millionth army", which in 1920 defended Poland against the Bolsheviks, then – as the president said – "threatened us red plague, a red plague, when those who wanted to take away our faith, our liberty, our Lord God, our Blessed Mother-everything that was so important to us for centuries, have come to us. "

– The same young boys then defended Poland in 1939, they fought in the underground during the entire occupation, in the Home Army, in the Peasant Battalions, they bled, never hesitated, or to go, die and risk my life for fatherland (.. .). Many of them were those who did not return to the squad after 1945 because they believed that Poland was not really free and independent. They stayed in this underground army, which today we call the army of the unbreakable soldiers; many of them were tortured, murdered, many of them lost their lives – always for the same: for free Poland, for our values, for family, for land, for faith, for paternity – the president said.

He emphasized that the patrimony was one of the elements that, apart from the fight, saved Poland when it was behind the so-called. with an iron curtain. – Fatherhood, which the Polish farmer never wanted to give away. And that is why Poland has failed to collectivize – thanks to the iron resistance of Polish farmers – Duda said, pointing out that the same farmers and their sons later created the Solidarity of individual farmers.

– I think the communists already knew that the matter was lost, because if the Polish village joins the protests of the intelligentsia and the workers, it means that the whole of Poland was against them. And precisely because this movement was universal and everyone was equal and equal, we won, Andrzej Duda said.

– We won and today Poland is sovereign, free and independent. And today we are actually ourselves. And let no one dictate anything to us, tell us what we can do and what we can not do; what we are allowed and what is not allowed, because we decide for ourselves. We decide, here in our country, what is fair and what is unjust, and what needs to change and what can still remain – emphasized the President, what the faithful rewarded with applause.

Duda thanked farmers for their contribution to Polish independence and – as he said – "steadfastness in standing on Polish soil, for our faith, with our great tradition", passed on from generation to generation. – Thanks to you, Poland is free, independent and sovereign. God bless the Polish countryside, God bless God of the Polish Republic, God bless us all – Andrzej Duda closed his speech.