Broniarz: Zalewska carried out a fatal reform, we will remind her of this on 22 September 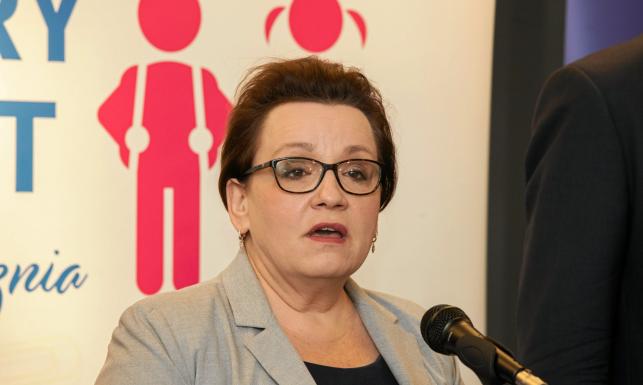 Rumors say Minister Zalewska leaves the Ministry of Education. What do you say?

These are facts about the media, so we do not treat them in PNA. If, however, as I said, it was included in the elections to the European Parliament, I would regard it as a misunderstanding. She made a fatal change in education and a start to this institution would be an undeserved reward. Anna Zalewska took away the autonomy of the schools.

If the minister goes, who should replace it? Among the candidates discussed in the media are Mazowsze Voivode Zdzisław Sipiera and current Deputy Minister Maciej Kopeć.

Most importantly, this person should not be angry and coded to do their best to implement their ideas at all costs. I do not know the pedagogical competence of the voivode. If I had to choose, Maciej Kopeć probably has the greatest talent. I mean his experience as a school director in Szczecin. In my opinion, it guarantees that he knows what he is talking about, and he will not come back, as Minister Zalewska does, only after his professional experience of the 1970s and 1980s.

However for qualitative change in education the position of the Minister of Education in The Council of Ministers. No one has had this high position since Minister Roman Giertych. There is no change here.

What is the biggest challenge?

Money for education, teachers, local authorities. So what can be done with the position that I am talking about.

After all, the walks of teachers are planned.

This year the salary increase is expected to be 5 percent. At the same time, the budgeted inflation is 2.3 percent. This means that inflation will require almost half of our inflation growth. And for me this is a problem, not only because of the already recruited, but also for those who want to come to this profession. We are talking about increases of a thousand zlotys per person.

It is a few billion more for education. Nowhere in the budgets are such increases not present.

Today we have competition from Lidl, Biedronka or Miejskie Zakłady Autobusowe in Warsaw, which offer 4.7 thousand on posters. gross PLN. And the salary of the teacher in training at the beginning is 2.2 thousand. zł. This is a drama from the perspective of the future of education, because those who are waiting for the school will not come to the profession. Even if they felt a calling or educational mission, they would think deeply about it. If Prime Minister Morawiecki is serious about it million electric cars from Poland, it is in education that needs to invest.

We are starting the next year of education reform. ZNP has assessed it negatively from the beginning. If he is a new minister of education, should he withdraw from the changes?

Reforms can not be undone. The minimum thing to do is analyze the core curriculum. The present is compressed from nine to eight years of training, which has a negative influence on the seventh graders who are overworked. Teachers can not keep up with the material and are responsible for it, so they transfer the work to students.

The base is overloaded, it requires too much learning by heart, it does not take into account that there are virtual sources. Preparing a new core curriculum today would be a qualitative change without the need to re-engineer the system.

Or is it perhaps a question of the quality of teachers' work? the report prepared for the ombudsman 60 percent. Polonists and historians admit that he does not finish all the material during the lessons.

I am not saying that all teachers are perfect, but the core problem is the core curriculum. The basis can be achieved if we limit our activities to a lecture or a lecture. But what is the effect on teaching? At the stage of his creation we have repeatedly asked to slim it down, while at the same time giving the teacher a little more time for what an experiment should be, proprietary ideas. Anna Zalewska found it unnecessary.

In the same study, students admit that they absorb about half of the content.

I do not deny that there are some teachers who should not be in the profession. I believe they should learn the best of the best. But here we come back to the money – we do not get them for 2.2 thousand salaries. zł. This is the biggest drama, not only in primary education, but especially in vocational education.

The new regulations will enable the hiring of specialists for higher rates there.

Yes, but the Ministry of Finance states that it will not give money. And it is not profitable for employers to invest in schools and teachers, because it costs less educated workers from the market.

But this is not allowed again by the Minister of Finance. So far, the recruitment to branch schools looks very bad. It is true that 2019 ensures that they are mechanically driven, because there are no places in secondary schools and techniques. But it is not comfort, because people will come to these schools, which will not come from genuine interest. The minister said in 2016. We expected the reform of the trade schools to do nothing, because the young people would go there alone because of the lack of an alternative and it will be a drama. We will break off statistical success, but we will still not have well-prepared painters, plasterers or mechanics.

We really have to think about the direction in which education should be developed, not to create a competence gap, that is to say, a lack of specialists. Negligence is here many years old, although Mirosław Handke made this mistake, which meant that too many students could graduate.

So students in secondary schools should be less? Here you agree with Minister Zalewska.

Yes, but the activities of the Ministry of Education will certainly not encourage young people to choose a vocational school. You can change their name and spend money on promotion, but without increasing the expenses for engaging teachers and inrichtende schools, there will only be empty words that will not bring about qualitative change.

No, we say stubbornly that employment will decline within three years. The fact that the situation is bad can be seen after the holidays for health and compensation benefits. the this year has made a huge effort to stop people from making local governments. First of all, two years go to high school. Secondly, we have an election year.

Is the PNA planning to take protest action?

All OPZZ structures were obliged to mobilize and prepare for a series of protests. We are also preparing. We talked about the details on the Sunday presidency of the ZNP. We are planning a major event in Warsaw – 22 September. We will remind Anna Zalewska what she did wrong in education. The vote is terrible, and it will be worse, because the new assessment of the work and the new obligations imposed on teachers on this occasion will take effect. The educational part of the FZZ also asked us if we would be interested in joint action. The question is whether the credibility of other trade union organizations makes it possible to do something together. Solidarity has so far legitimized the activities of Zalewska, it is hard to believe in her sincere resistance to the plans of the Ministry of National Education.