"Coffee on the couch". Politicians comment on President Duda's speeches 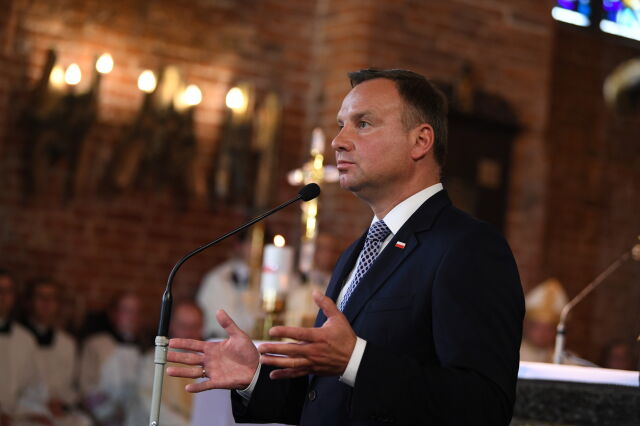 The president shouted in pseudopatriotic intensification to the church that the Communists were in the Supreme Court – he judged Andrzej Duda Bartosz Arłukowicz of Platforma Obywatelska in the "Coffee on the couch" in TVN24. He emphasized that it was "one of the most unpleasant images he has ever seen". – Political discussions are completely at the end – argued President Krzysztof Łapiński.

On Friday and Saturday, in connection with the celebration of the 38th anniversary of the signing of the August Accords and the outbreak of the Second World War, Andrzej Duda stayed in Pomerania. In his two speeches – one in the church, the other in school – there was no politics. The president referred, among other things, to the dispute over the Supreme Court.

"He is used to the fact that some people are protesting"

President Krzysztof Łapiński, a spokesman for the president, remarked on Sunday in "Coffee on the couch" in TVN24 that a large part of the President's speech in the Basilica of Gdansk was "about August strikes and heroes of that time".

– At the school in Gdynia, the situation was such that a group of MPs protested outside with regard to the COD. They protested all the time and disturbed the speech of a 92-year-old veteran who handed a scholarship to a student – explained Łapiński. He pointed out that Andrzej Duda "is used to the fact that some people are protesting".

According to the spokesperson, "the President's speech for young people concerned the issue of their future and their desire to succeed." – Finally [Andrzej Duda – przyp. red.] he apologized to the old man whose speech was drowned out. Political threads were completely at the end – he stressed.

"He screamed in pseudopatriotic intensification"

– One of the most unpleasant images I've seen – said President Bartosz Arłukowicz of Platforma Obywatelska. As he remarked: "Andrzej Duda shouted in pseudopatriotic intensification in the church that the Communists are in the Supreme Court."

– It was your PiS team that handed it over to the communist prosecutor [Stanisława – przyp. red.] The pseudo-reform of Piotrowicz, or rather the annulment of courts, pointed out PO-MP in the light of Jacek Sasin and Krzysztof Łapiński.

Sasin about the difference between judges and politicians

– What other politicians are, because they are subject to democratic verification – Sasin responded to the words of Arlukowicz.

He noted that "this is the situation of politicians of judges". – If voters think that a former PZPR member does not deserve to be in the company, they send him back to his pension. The jurors are not subject to verification. Once called, they function regardless of how they behave or meet moral standards – he explained.

"PiS is the best example of multi-cult politics"

Piotr Zgorzelski of the Polish People's Party, in turn, admitted that he "embarrassedly listens to switching, who was in which party". – PiS is the best example of a political multi-cult, because in this party there are representatives of all others who have been on the political scene since 1989 – he pointed out.

He also added that he "miserably listened to the president". – It was clear that he regretted that there was no bloody revolution in Poland – judged Zgorzelski.

"Walesa sometimes exaggerates in the rush of everyone's quarrels about everything"

When Andrzej Duda started his speech from the pulpit of the Gdańsk basilica, ex-president Lech Wałęsa left the church.

Marek Jakubiak from Kukiz & # 39; 15 pointed out that Walesa's response was "before the president's speech, he did not know what the president would say, and he had already left."

– It would be good if Walesa accepted that the citizens elected the president and that he owed respect and respect. Walesa sometimes exaggerates in the outflow of everything about everything – emphasized the deputy.

"The president went so far that the youth did not understand"

– Agitation at school is against the law – reminded the president of Modern Katarzyna Lubnauer, referring to Andrzej Duda's speech in Gdynia.

According to her, "the president went so far that the youth did not understand, because the holiday that must connect us can divide us so."

– Youth at the beginning reacted very calmly. It was only when it became apparent that the president was going into political discussions that the youth began to cry: "Constitution" – Lubnauer emphasized.

Political speeches at school and in the church

Andrzej Duda on Friday, August 31, during a mass commemorating the 38th anniversary of the signing of the August Accords in the Basilica of St. Bridget in Gdańsk, he said that discussions and disputes about the turn of 1989 are underway .

– You can agree with different concepts and theories, but the facts are that there has in principle been a bloodless revolution in Poland – he said.

At the same time, he assessed that we are now paying the price for this. – This price also includes diseases that have been continually eroded by our country. For how can we not call the sickness that in the Supreme Court judges who have condemned the independence of the underworld still rule during martial law? – he asked.

On the other hand, Duda participated on Saturday at the beginning of the school year in the III High School of the Polish Navy in Gdynia. In his speech he referred to the continuous choice of opposition circles in the judiciary for the school building. The sirens and the screams were heard from the demonstrators' side, including the Constitution & # 39;

– I am deeply convinced that the majority of the inhabitants of Gdynia are furious, that until now they have pronounced in the Supreme Court people who have pronounced subterranean convictions under martial law. They are and it has been proven. I believe, I ask you, that we will have a strong, free and just Poland, strong, free and just, free from communists and post-communists, "he declared.