Conditions for the "safe abortion" march were violated. The demonstrations were interrupted

poland October 1, 2018 Nation, poland Comments Off on Conditions for the "safe abortion" march were violated. The demonstrations were interrupted 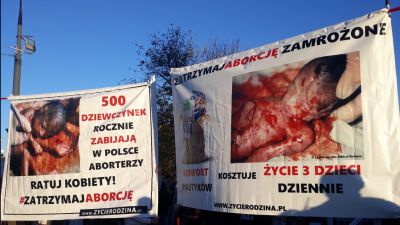 Around 18:30 the police informed the participants of the march of supporters of abortion at the dissolution. Numerous torches were ignited during the event. The security services decided that the conditions of the demonstration were violated. Pro-life organizations that organized anti-abortion against demonstration responded to the march.

On Sunday at 17:00 at the Dmowski roundabout in Warsaw a march of supporters of generally available abortion began.

On the profile of the social media, the organizers wrote about the event: "abortion – legal, safe, free and above all available when necessary, regardless of the reason accompanying the person when making the decision not to continue the pregnancy No shame, no fear, no fear – we will go to Warsaw on September 30 to celebrate the World Day of Safe Abortion. "

Manifestants carried banners, including subtitles: "Understand the bishop, we have you in the …", "Honor and glory to the aborters", "The right to abortion by the right of man". Pro-life activists with posters about killing unborn children were on march.

Kaja Godek of the Życie i Rodzina Foundation has published a movie on Twitter that offers a solution for collecting aborters. "Despite the calls, they block traffic and do not want to separate," she wrote.

A resolved meeting of aborters took place at the picket # ZatrzymajAborcję and provokes proliferators. Despite calls, they block traffic and do not want to get out. pic.twitter.com/OVUHXWF5iP

Pro-life organizations that organized anti-abortion against demonstration responded to the march. More than 100 people took part in the public prayer of the rosary.

The anti-abortion foundation car was burned

In the center of Warsaw the car of the anti-abortion Pro-Right to Life Foundation was set on fire. There was a banner on the vehicle with …

"Celebrations of the animal killing of feminist unborn children also want to celebrate dance.For the organizers, every child killed in abortion is an opportunity for joy and pleasure.It is devilish behavior.The organizers of the event simply state the eugenic thought, according to which it is possible and necessary to remove people who are defects, they also want the false idea of ​​the so-called safe abortion – in other words, to kill people safely Abortion has never been safe and will not be safe, so that the child is always killed, the victim is also female "- wrote on the website of the Life and Family Foundation, which organized counter-manifestation.