Contract for the tunnel in Świnoujście signed. "It is a symbolic moment" 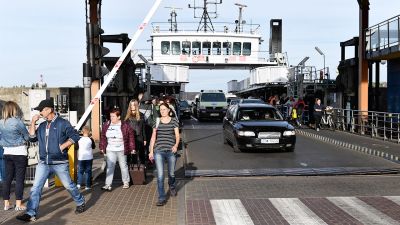 This is a symbolic day in which "we break many earlier patterns" – said Prime Minister Mateusz Morawiecki during the ceremony of signing the contract for the tunnel at Świna, which connects the Uznam Islands, on which the center of Świnoujście and Wolin is located.

A consortium of Porr S.A. is a new contractor for the tunnel between the Uznam and Wolin Islands in Świnoujście (West Pomerania province) – informed Szczecin …

The contract provides for the construction and construction of 3.4 km of a single carriageway, including 1440 m in a tunnel with a single tunnel with a diameter of 12 m. The road connects the islands of Wolin and Uznam in Świnoujście, connecting Uznam with the mainland without crossing Germany.

– Every day we will make sure that the tunnel will be really open in four years, so that this combination will prove to be something that was characteristic of previous years: impossibility, imposibilism – the prime minister assured.

– I believe that, through such investments as these, we will not only polish Poland in the material, infrastructure, symbolic, interpersonal dimension, but also show what Poland can do in the development and economic dimension – the Head of Government added that this is a symbolic day in which "we break many earlier schemes".

The Prime Minister also said that the ceremony is "symbolic" for the "merging" of Poland. He stressed that "today is a sad date in Poland's history" – September 17 – "when the Soviet Union attacked Nazi Germany on Poland" and it is "the symbolic date of tears in Poland".

– But this step, which we are carrying out today, is a reverse action, it is the act of merging Poland, it is an action that should lead to the fact that Poland was really one, that it would be connected by roads – the head of the government emphasized.

The arteries, which connect West Pomerania to other districts of Poland, said the Minister of Infrastructure Andrzej Adamczyk, who reminded that on Saturday 34 km from S3 road in Lubuskie Voivodeship was commissioned, and further sections will be transferred at the end of the years, leaving a non-collision route from Szczecin to Bolków in Lower Silesia.

The new part of the S3 road is open. "Good connection from our ports to Southern Europe"

We build roads in forgotten places; we aim for the Poles to see that you can feel in the West, this is the main goal …

As the minister said, investments are being made concerning additional sections of S3 from Troszyna near Kamień Pomorski to Szczecin and from Bolków to the border with the Czech Republic in Lubawka. Work is also being done on the construction of the S10 road from Szczecin to Warsaw, as well as the S11 road from Koszalin to Upper Silesia.

The head of the infrastructure department said that it is worthwhile to have dreams. He told about the dreams of tourists who had to wait a few hours to get to Świnoujście; the inhabitants of the city who sometimes had to travel to the mainland through Germany; those who hoped that they could safely navigate along Polish roads along the western Polish border.

Currently, communication between Uznam and Wolin and the rest of the territory of Poland is provided by ferries, which do not have sufficient capacity, often resulting in a long waiting time for the ferry and which are sensitive to changing weather conditions.

Świnoujście is situated on a few dozen islands, of which only three are inhabited – Uznam, Wolin and Karsibor. On the island of Usedom there is an administrative and service center and a coastal district with tourist and health facilities; 80% live here residents of Świnoujście.