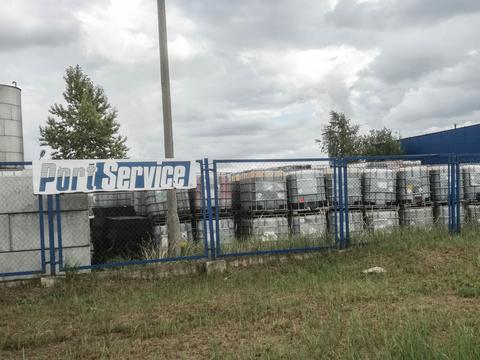 "We were the first to warn that 700 tons of chemicals and hazardous substances from Gostynin should be illegally deposited to Gdansk." Thanks to this, the VIEP announced an inspection in Port Service and President Adamowicz banned the import of this waste "- Gdańsk representatives write on their website They are the Residents, an opposition group brought to life a few weeks ago.

There are emotions, but hard evidence is lacking. The opposition talks about breaking the contract with Port Service

Today representatives of GTM (also supported by Elbląg Member of Parliament Andrzej Kobylarz of Kukiz) tried to find out at the main office of the Port Service exactly which waste ends up and whether they are stored or immediately removed. The president of Port Service was not present, however, and the director of the environment did not want to answer any of these questions. She assured herself that more messages would soon appear on the company's website and that all issues related to Gostynin's waste would be clarified there.

It is now known that the first waste from Gostynin Gdansk has already reached. We also know that the port service has been inspected by inspectors from the Voivodship Inspector of Environmental Protection since yesterday. Much depends on the results of this check.

However, the opposition is of the opinion that such actions are not sufficient. GTM representatives demand that the city break the contract with Port Service, even if it would involve millions of dollars. – I think that in this case the residents will agree to light up the belt, especially in the context of the fact that Gdańsk is a black spot on the map of Poland in terms of the incidence of cancer. – says Łukasz Hamadyk of GTM, city councilor who until recently was a politician of law and justice.

– The plant imports substances that nobody in Poland wanted to adopt for 10 years. We still do not know how much this waste really gets here and we do not know what kind of waste it is. This is not the first story of Port Service that raises a number of doubts. We are fed up. We will do everything we can to keep Port Service closed – he adds.

But such statements, even supported by the support of a group of residents, are not enough. Port Service ensures that it works according to the applicable rules, and its lawyers are certainly prepared for the following battles. Breaking the deal, which the opposition is talking about, would certainly mean a sharp response from Port Service.

Gigantic compensation for Port Service? The city writes to the voivode

It is important that the company operates on land that is rented from the treasury. The Magistrate of Gdańsk emphasizes at each step that he has not signed this agreement, that it is not a common possession and that the decisions are on the part of the voivode. A letter was sent to the latter a few days ago. The magistrate asks the addressee of the message "to evaluate and balance the consequences of an attempt to terminate the lease contract".

However, this is not that simple. Port Service has a valid lease contract until 2024. And if it had been resolved in advance, someone (the city or the state) would have to cover the costs of such a decision. Officials do not have an exact number here, but all our interlocutors pointed to the sum of a minimum of tens of millions of zlotys, which would go to Port Service as compensation. The questions remain open: the voivode and officials will decide to break the contract with the company and who will then cover the losses.

Port service representatives posted a report on their website yesterday, in which they admitted that they were committed to collecting, transporting and disposing about 700 tonnes of "hazardous waste".

Port Service does not understand where such emotions come from

The statement reads: "The legal activity of Port Service, whose management is hazardous waste, should not give rise to controversy because it accepts hazardous waste every day." There is nothing unusual about the fact that the waste treatment plant accepts waste for disposal. Is it strange that a furniture company sells furniture? A series of inspections that the company goes through every year confirm that we are a leader in northern Poland when it comes to environmental standards in the waste industry. "

GTM representatives admit that they have no firm evidence here that would demonstrate that in the case of Gostynin waste, Port Service has violated the law. – We rely on a reliable audit of relevant services. The people of Gdańsk ask us not to leave this issue unattended. Some do not trust the authorities alone. We want and we will look at the officials in our hands. This case will certainly not be silenced. We will not allow it – explains Jacek Hołubowski, GTM candidate for the office of the President of Gdańsk.