Maciej Mitera: the KRS meeting today will not take place 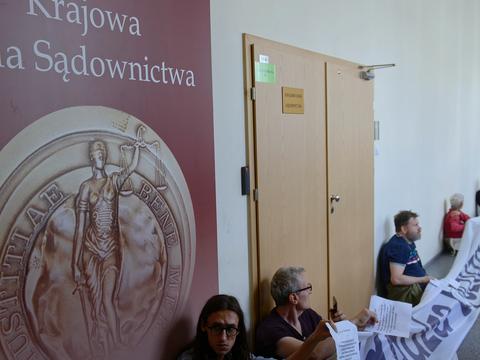 When Alicja Seliga from the office of the National Court Register was previously informed, the Council's teams had to hear four candidates for the Civil Chamber and two for the extraordinary control room. However, the start of hearings by teams was prevented by a group of about 10 demonstrators from the Citizens of the Republic of Poland movement. The demonstrators blocked access to the room where interviews with the candidates would take place.

The demonstrators hold a banner with the slogan "The one who violates the highest law betrays his homeland".

Today's sessions of the National Court Register had to start at 10. According to the meeting plan, the Council has to select candidates on Monday for the civil chamber of the Supreme Court. There are seven vacancies to be filled in this room.

Judge Mitera was asked by journalists whether or not to abstain from the selection of new judges to the Supreme Court until the CJEU acknowledged the preliminary questions from the old SN. Today the European Court started to investigate the Polish application. – I do not see the connection – said the National Court Register spokesman.

Mitera was also asked about a statement by Jaroslaw Gowin in an interview for the weekly "Do Rzeczy". The Deputy Prime Minister said that if "the Tribunal has sanctioned the suspension of the law by the Supreme Court, our government will have no choice but to ignore the ruling of the CJEU".

– I can not imagine that someone would not respect the CJEU's ruling – said Judge Mitera. The Commissioner was also asked about the membership of the national register of the Court of Justice for the European Judicial Council Network. When information about the possible exclusion of the Polish Council appeared, Deputy Piotrowicz depreciated the organization and said that they should consider how much of it is "fruitful". – In my opinion, this organization is prestigious. I believe we stay in this organization – said Judge Mitera.

Spokesperson for the National Court of Justice: the President of the Council asked the rector of the University of Life Sciences in Warsaw (SGGW) to block the proceedings

The building in which the national court is located is owned by SGGW. – The president of the national court has submitted his application to the rector of the university where we are located, requesting that the security services make the situation normal. The national judicial register is a constitutional body and today it has been prevented from functioning normally – Mitera told reporters.

As Mitera notes, "we hope that the rector will bring such an initiative to the security services".

Filling vacancies at the Supreme Court

At the end of June in the Polish Monitor, the president's announcement of vacant positions in the Supreme Court was published – there are a total of 44 vacant vacancies.

In turn, on Thursday, the Council considered candidates for 16 vacancies in the SN Disciplinary Chamber. The National Court Register has adopted a resolution to request the President to appoint twelve judges in this chamber. Four places remained vacant because none of the candidates who moved to the next round did not receive the required majority of votes.

Earlier, almost 200 candidates for 44 judges in the Supreme Court were judged by four KRS teams.

The Council will provide the cast of 20 vacant judges in the Extraordinary Audit Chamber and Public Affairs of the SN tomorrow.