Morawiecki: I negotiated myself about joining the EU. Miller: Please wait until I die 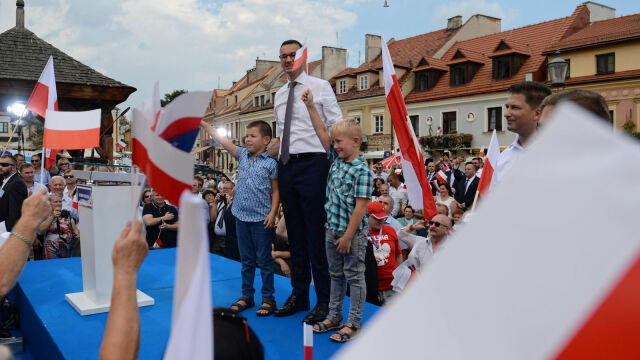 Matthew Morawiecki, who spied this point in the premier's cv, knew little or no knowledge, because he had not exaggerated this element of his professional biography so far.

Perhaps he acknowledged that a few months' work in the office dealing with Brussels – which is actually in the Prime Minister's official biographical note – is not enough to say that "Poland's accession to the EU was being negotiated". It took a number of months – 20 years ago. Just before the start of work … at the bank.

– He was one of the very many gears in the huge machine. A cog is probably quite important in terms of coordination, but not decisive, and certainly not negotiating – says Jan Truszczyński, head of the team negotiating Poland's accession to the EU.

"Prime Minister Morawiecki: "I negotiated Poland's accession to the EU 20 years ago." You have not negotiated anything. Please wait until I die. "

A bit of this evil irony, and a bit of sincere anger, because Miller led the negotiations over the years and he ended them.

– If he said that he participated in negotiations in which other people participated, it would be all right – says Małgorzata Kidawa-Błońska, deputy Speaker of the Sejm on behalf of the PO.

From the photo 's from 1998 it follows that long negotiations with Brussels were led by the main negotiator, Jan Kułakowski. He was the one who led Poland through the most difficult, first stage of conversation. Then there were the next stages that led the Leszek Miller government.

Over the years, the bars of different levels of officials have flown in the negotiation teams. Mateusz Morawiecki was one of them for several months. That is why this speech was so scandalous, for example from the former prime minister.

– Absolute detachment from reality, because I do not believe that he is a man who can say everything. He probably believes in what he says. Somewhere he seems to have lost touch with reality – says Sławomir Nitras, PO substitute.

In this harsh way, the opposition MEP also comments on another part of yesterday's speech, in which the Prime Minister spoke about the opposition, namely these words:

– They introduced the rules that large companies, shopping centers, actually did not pay taxes, and paid a small business – said Prime Minister Mateusz Morawiecki on Sunday.

Only this element of the prime minister's CV is known. For years he was the president of the third largest bank in Poland. Bank, which is owned by a powerful Western banking group. Spanish Santander.

– The president of the Western corporation says that these companies have gained profits, he is the first accused in this case – says Sławomir Neumann of PO.

– After the work in the bank, the prime minister has knowledge and experience – replies Tomasz Poręba, PiS deputy.

On Sunday, the prime minister officially joined the PiS campaign of the local government.