Morawiecki negotiated Poland's accession to the EU? Responses to the words of the prime minister 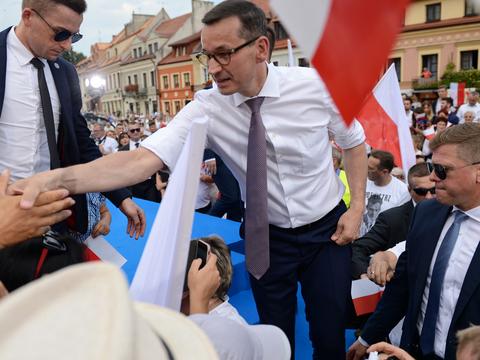 The Prime Minister's words demanded many reactions to social media. Leszek Miller wrote: "You have not negotiated anything, please wait until I die."

Roman Giertych also made jokes from the prime minister's words. "PMM stated that he was negotiating his accession to the EU, and I joined NATO and I signed the Treaty of Versailles before I beat the Turks in Vienna and Khotyn, the Swedes in Kircholm, I trusted Prussia, I peace made in Toruń, won under Grunwald, Płowce and Cedzyna "- wrote on Twitter.

Leszek Balcerowicz in turn asked "who and what" was negotiated by Prime Minister Mateusz Morawiecki.

"As M. Morawiecki, based on the fact that he was a co-worker of R.Czarnecki in the office of the Committee for European Integration, where he developed strategies for negotiating and joining the EU, he says:" I have negotiated on the accession of PL to the EU ", what about the merits of R.Czarnecki?" – Jacek Nizinkiewicz, a journalist from "Rzeczpospolita", commented:

Maciej Lasek believes that since Morawiecki has negotiated Poland's accession to the EU, and now that the Union "clings to the PiS government, it has probably gone wrong."

EU budget: the final outcome of the EU negotiations will be much better than everyone thinks

– We can negotiate in the EU; the end result of these negotiations will be much better than they think and it seems everyone; it will be development for Poland – Prime Minister Mateusz Morawiecki said about the EU budget at the Sandomierz election meeting

The Prime Minister said that the opposition politicians "do not know the economy". – And we know very well how to negotiate in the European Union to get what we have received – he emphasized.

– They introduced the rules that large companies, shopping centers, large stores, commercial buildings in big cities did not pay taxes. A small entrepreneur paid. We are talking about it – the Prime Minister said

– Poland is part of Europe. In the time of our predecessors, Poland was a small parrot of Europe, we imitated it alone. Today, Poland, we set standards, ideas and proposals. And these ideas are copied everywhere in Europe, for example in the field of VAT or the fight against tax havens – he emphasized. – We are an increasingly important Member State in the EU and we will become increasingly important – he added

Speaking about PO and PSL: he said: "Do you know what they have remembered?" The words of your own minister responsible for European funds. As 3 or 4 years old This minister said that this previous budget perspective is the last of such a large budget, and the next will be much smaller. "They said it now, and now they scare people with what they said earlier."

– And I have very good news for you. Because we can negotiate in the EU and the end result of these negotiations will be much better than they think, then everyone thinks. This will be development for Poland – said the prime minister

He also said that the Visegrad group achieved "great successes" during the last European Council. – It will depend on us whether we want to receive someone or not. And they (opposition – editors) said: accept all refugees from the Middle East – said the prime minister