Nowy Targ: investigation after the accident in Szaflary. An 18-year-old student died 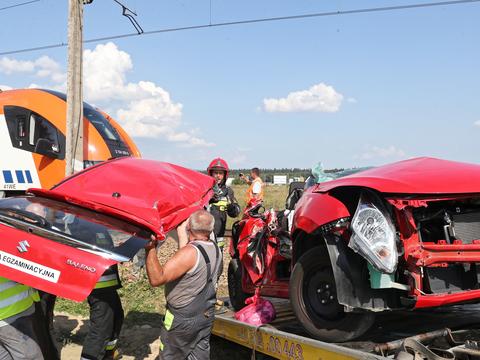 The accident happened yesterday on an unguarded railway crossing. Preliminary police findings show that when a woman who has successfully completed her driving test has driven a car in transit, the vehicle has probably gone out. Oncoming car of Nowy Targ – Zakopane hit the car.

An 18-year-old with serious injuries was taken to the hospital in Nowy Targ, where she died. The examiner saw the train and escaped from the car before the collision. Prosecutor Palenik has stated that many activities have been carried out at the scene of the accident, but witnesses have yet to be investigated.

The expert opinions are important in this case, including witness experts in the field of road traffic. The public prosecutor's office will also be introduced to the advice of experts from the Railway Accident Investigation Commission.

As an important proof, the head of Nowy Sącz's parquet indicated the recordings from the interior of the exam car, as well as the surveillance of the nearby concrete factory and the passage of the train. Researchers will also check whether the formal conditions of the research have been met.

– Only after collecting all materials will a decision be made about the further course of the procedure, for example whether it will be directed against a specific person. When the "in the case" procedure was carried out, no charges were filed with anyone – the prosecutor Palenik emphasized.

According to researchers, the case is complicated because it requires an assessment of who and to what extent the accident has contributed. To cause a disaster in traffic with fatal consequences, the criminal code provides for 2 to 12 years in prison.