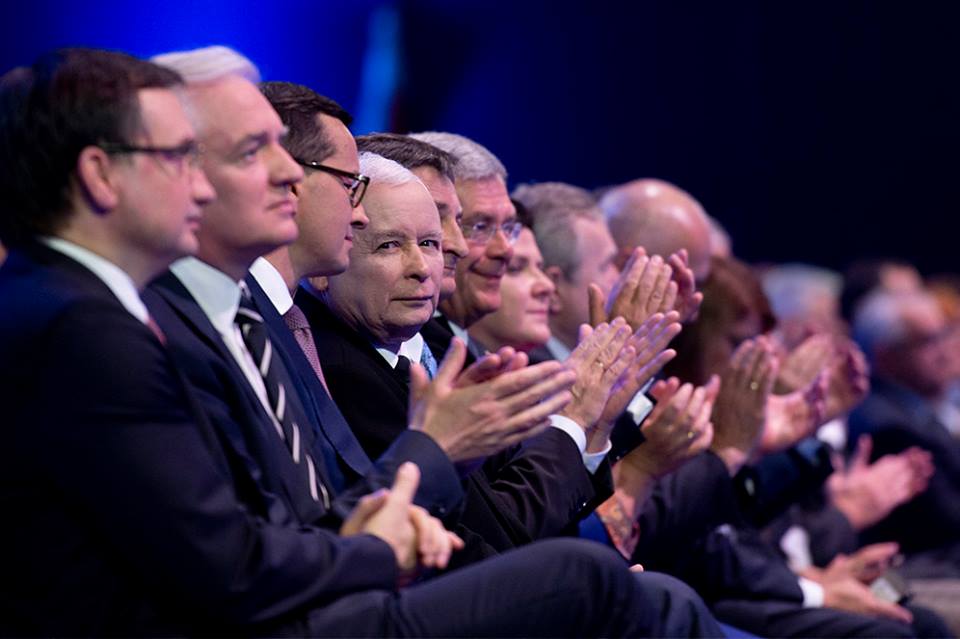 A post-war political season can be considered open. The PiS held an election conference of two and a half hours in Warsaw, that a victorious march would start in power in the local authorities.

Jaroslaw Kaczynski spoke first, but surprisingly he was not the main speaker, and his speech lasted only about 20 minutes. The head of the PiS tried to disarm the fear of his party; he promised he would not go to elections to "ration and settle", he also spoke about the benefits of membership of the European Union. He stressed that local government agencies should cooperate with the government – this idea was later developed by Mateusz Morawiecki – and emphasized how important the unity of law is.

After the speech, Kaczyński, together with Jarosław Gowin and Zbigniew Ziobrą, signed an agreement on a joint start in municipal elections; rather a theatrical event, because the alliance has been decided for a long time and the electoral lists are almost finished. But the people of Pisov could see that Ziobro and Gowin stayed in the communal camp, and the coalition ministers could even be on stage for a moment.

The essence of the convention, however, was to familiarize the electorate with the fact that Morawiecki is now the face of PiS. For the premier it is a debut in this role. It's a bit hard to believe – it's been almost four years in the government almost a year ago – but the campaign experience is limited. But attention, progress in this area has done a lot. Since his first big speech in Przysusze in July 2017, Morawiecki has developed rhetorically, and above all the room has been much better received by him. He is still in trouble – in the middle of a hot day he compared the PiS with the snowball – but the progress is clear.

So much shape and content? Morawiecki praised that he had fulfilled the promises he had made in April during the previous PiS convention (including a school trip) and presented five more. The "Warm house" program should lead to a reduction in energy costs and also waste disposal fees for those who separate waste. The second promise concerns the construction of retirement homes, playgrounds and sports centers (costs PLN 500 million). The third issue is heating up the cutlet from the time of Przysucha, or "100 megabits for the century of independence" (connecting 20,000 schools and all municipalities with broadband internet for PLN 4 billion). Morawiecki also announced 300 million support for municipal participation budgets and assistance in the development of transport infrastructure (from sidewalks to stations and bus lines).

At this general level it is difficult to refuse these plans of fairness, although it is worth mentioning that some of them are already being implemented. There are doubts however Morawiecki's centralism comes from the speech; In his view, local authorities are not so much an independent local government as a kind of link between government and citizens. The Prime Minister called on the electorate to vote for "hosts who do not take offense at the central authority but can cooperate"; it sounded like a suggestion that the cash flow would flow first to where the PiS candidates would take power.

Presidential candidates prevailed between the President and the Prime Minister: Warsaw, Gdańsk, Kraków and Wrocław, and the President of Stalowa Wola, Lucius Nadbereżny, whose unexpected victory in 2014 was to inspire this year's elections. PiS personnel used an interesting strategy – candidates were presented by members of their family. Patryk Jaki and Kacper Płażyński praised their wives and Małgorzata Wassermann – sister.

Morawiecki left from convention to Łowicz

It smelled of soap opera, but it is a popular genre, so it will probably help in the campaign. Directly from the Morawiecki convention he went on a trip with a coach for a campaign meeting in Łowicz. He was said hello by calling "we will win", but it will be difficult despite the triumphalistic tone of the convention. There are no indications that the PiS could be more successful in the presidential elections in the largest cities, and most regional meetings are likely to remain in the hands of the PO and are particularly heavily attacked by the Moravian PSL.

This weekend belonged to the PiS in the media, but the next will be presented by the Civic Coalition, PSL and SLD. The campaign has started forever.

PS Mateusz Morawiecki said wonderfully that he would try to "keep Poland" and cover the divisions. I will suggest that he could start from his own backyard. Newsweek journalist Marta Szymczyk did not receive accreditation for the conference due to lack of places; when she gave up as a reporter for Radio Maryja, the place suddenly stood. In addition, selected journalists received an e-mail with information about the place of convention and accreditations, others – from POLITYKA or "Gazeta Wyborcza" – were omitted. The last party that selected journalists in this way was LPR from Roman Giertych. I do not know if these are patterns that Morawiecki would like to refer to.