Podkarpackie. The coach slumped down the slope 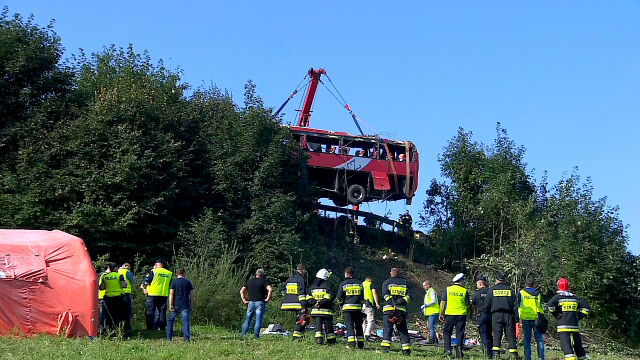 For three months he arrested on Sunday the court in Przemyśl the driver of the Ukrainian coach, who fell off the slope on Friday evening in Leszczawa Dolna (Podkarpackie) and repeatedly turned around. Three people died, many were injured.

The District prosecutor's office in Przemyśl beckoned the arrest and supervised the investigation of the accident.

The driver of the coach Mykola Ł. Was questioned in the public prosecution on Sunday and heard the accusation of deliberately bringing about a disaster in land traffic, as a result of which three people died and many were seriously damaged. The man did not plead guilty to the act with which he had been accused and made a statement. He is faced with up to 12 years in prison.

The prosecutor in Przemyśl Beata Starzecka-Skrzypiec informed the detainee of the detention on Sunday evening. The prosecutor said that the defendant in court claimed that, just as in the public prosecutor's office, the accident occurred because the brakes had been broken.

The decision on the arrest was made on Sunday evening after an hour of clandestine trial. The decision is enforceable, ie the suspect is immediately detained but not legally valid, which means that the parties can lodge a complaint

If the Public Prosecutor Starzecka-Skrzypiec , previously suspected during the hearing in the prosecution, he admitted that the road was difficult, the smooth surface was missing. He said that the itinerary and the crossing of the Polish-Ukrainian border by the crossing in Krościenko was a travel agency – an organizer of the trip – and he did not know this route and was navigated.

He claimed that since he saw a sign informing about serpentine on the road, he was driving at a speed of 50-60 km per hour, while the mark with a speed limit of 30 km did not notice it. He had previously seen a mark with a limit of 50 km / h. He claimed he was trying to brake at the critical moment, but the brakes failed.

On the other hand, according to an expert in the field of traffic, the driver traveled with 75 km / h with a restriction of 30 km / h at the scene of the accident

Mykola £, has been a driver for 10 years, he has been working as a coach driver for about 6 years and since January of this year he travels on international routes, including Austria, Italy, Germany and the Czech Republic. The coach had a substitute, but – as the prosecutor said – completely from the departure from Lviv – around 3.30 pm on Friday Polish time (4.30 pm Ukrainian) – he ran alone. He was sober. The coach traveled from Lviv to Vienna. Passengers are people aged 8-55.

He fell out of the way and fell into the abyss

The accident of the coach took place on Friday after noon. 21. on national road No. 28 in Leszczawa Górna, between Przemyśl and Sanok

The vehicle, which was transported by 54 people, including children, drove a sharp turn of the lane and rolled several times from a high, grassy overgrown slope. The coach had a Ukrainian registration and transported tourists from Lviv. He went to the border crossing with Slovakia in Krościenko

– The operations of four people lasted in the morning – according to the reporter. She reported that all people in hospitals are surrounded by the care of a psychologist. The crisis personnel reported that there are Ukrainian interpreters in hospitals

On Sunday there were still more than 30 participants in the accident in the hospitals in the region. Nine people returned to Ukraine after the hearing. However, a few stays in one of the hotels in Przemyśl. They have both psychological help and a meal.

The coach fell out of the way on the so-called deathbows. The vehicle broke the energy-consuming barrier and fell, hit a wooden cross in the bend around the corner – a photographer at the Polish press agency that was there at night.

There have been many accidents of coaches and trucks in the past. The victims are commemorated by a cross that was hit by a coach on Friday